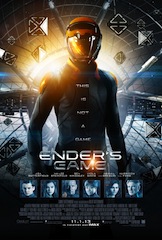 Light Iron provided on-set color, color workflow, and final color for the weekend box office hit Ender’s Game. The company has released an in-depth video on its Ender’s Game workflow, highlighting the collaboration and innovation that fueled this multiyear project.

“Ender’s Game is an amazing science fiction movie, with a behind-the-scenes story equally as compelling as what’s on the screen,” says Light Iron CEO Michael Cioni. “Light Iron collaborated with the VFX team at Digital Domain to create a powerful color pipeline that delivered the vision of director Gavin Hood and cinematographer Don McAlpine. From setting looks on-set with our Lily Pad System, to managing metadata with our Live Play iPad app, to determining multiple colorspace deliveries of VFX shots, to creating complex branches of scene looks in the DI, our workflow was progressive at every step.”

McAlpine appreciated the Lily Pad and Outpost combination and said,“Tim provided a good solid backing and the Lily Pad was an efficient portable visual control center. This, backed with the security of Light Iron, proved to be a very efficient and reassuring protection of the product we were producing.”

Also on-set, Light Iron’s Live Play iPad app was used in conjunction with the 5th Kind app to log and track metadata for the numerous VFX shots to be developed.  The handoffs of photography elements to Digital Domain and completed VFX shots back to Light Iron were in specific configurations so that, in the DI, supervising colorist Ian Vertovec had maximum flexibility to apply color grades across VFX shots and uncomposited R3Ds in the same scene.

Vertovec worked closely with McAlpine and Hood to develop the final look of the film, including crafting subtle day/night cues to structure the passing of time and separating color profiles to enhance the emotional thematics of the story.

“When you work on a project for more than a year, it makes a tremendous difference when the work flows seamlessly from set through DI,” Cioni said. “Our innovative process is different from those of the legacy companies of post production, in the same way that Netflix is different from Blockbuster and Yelp is different from the Yellow Pages. Being progressive in data processing and color management enables clients to leverage file-based tools to reach maximum creative control.”