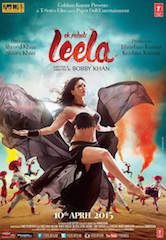 Digital video on demand service M-Go today announced the launch of its Bollywood collection. M-Go is a joint venture between DreamWorks Animation and Technicolor.

The reincarnation-themed Ek Paheli Leela, produced by T-Series and distributed by Saavn in North America, follows a woman whose romance with her murdered lover spans centuries. The film is part of an initial assortment of more than two dozen feature Bollywood titles now offered on M-GO, with some available in 4K.

"I am so excited that my fans will now be able to watch Ek Paheli Leela on their favorite digital platforms," said Leone. "I believe in the power of the digital ecosystem and am thrilled that my film will now be available for my fans to watch when they want."

Neeraj Kalyan, president of T-Series, added, "We are proud to be a part of this digital release for our latest title, Ek Paheli Leela on M-Go. Sunny has done an exceptional job and we are glad that this film is the centerpiece of the Indian film category."

"This exciting partnership with FilmKaravan represents our first concentrated effort to bring even greater variety to our selection of international, foreign language, and independent content," said M-Go senior vice president of Content Cameron Douglas. "In the increasingly global film community, Bollywood content is incredibly popular with movie fans all over the world, including here in the U.S."

"FilmKaravan's goal is to bring the best of Indian content produced by big studios like Yash Raj Films, Dharma Productions, Excel Entertainment, T-Series and Rajshri, among others, to platforms committed to presenting eclectic programming to their audiences.  It gives us great pleasure in partnering with M-Go, one of the fastest growing VOD services, to reach their audiences through aggressive positioning and passionate marketing plans," said Pooja Kohli, managing partner, FilmKaravan.

The Bollywood collection is the latest in a series of additions by M-Go. Other innovations include M-Go Advanced, the video browsing app for Samsung Gear VR, powered by Oculus, and what it says is the largest catalog of UHD content from any transactional VOD in the United States.