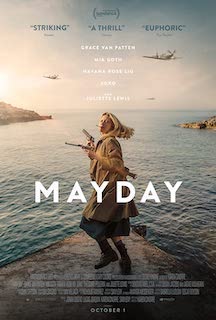 “When you’re preparing a film you can indulge in dreamy conversations –– it’s an essential part of the process that gets infused into the work,” says cinematographer Sam Levy. “But once you’re on set, and the clock is ticking, you find yourself a passenger on a moving train. Sometimes it’s a slow-moving train, but that train is moving. This was very much the case when we shot Karen Cinorre’s new film Mayday.”

Levy has shot such films as Lady Bird for director Greta Gerwig, Frances Ha for Noah Baumbach and Wendy and Lucy for Kelly Reicardt. He happily chose Cooke Anamorphic/i primes to accompany him on his journey in shooting Mayday, a new film from writer/director Karen Cinorre. The film was released October 1 in theatres and on-demand through Magnolia Pictures.

“Mayday is an action fantasy about a young woman finding her voice, a modern take on The Wizard of Oz,” said Levy. “I spent years looking for the right tools to capture this story the way I saw it in my mind. Along the way I met the optical genius Kavon Elhami, owner of Camtec in LA. He told me about this special flare coating for the Cooke Anamorphic/i SF lenses and I simply had to try them out. I wasn’t going to take just any old lenses with me to Croatia to capture this once in a lifetime project. If you’re reading this, take a second and go watch the trailer for Mayday, you’ll see what I mean. I tested every lens under the sun, but I kept coming back to the Cooke Anamorphic/i SFs. I knew I’d always regret it if we used anything else.”

Levy added, “At one time, we considered spherical primes for the opening sequence, but the allure of the SFs was simply too strong. We gave ourselves over to their majesty for the run of the show.” 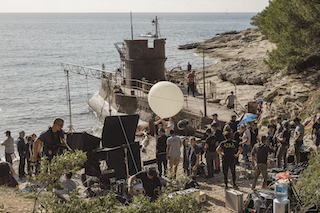 Mayday is the story of Ana (Grace Van Patten), who is mysteriously transported to an alternate world, where she meets a crew of female soldiers caught in an endless war. Along a strange and rugged coastline, men face the stark truth lurking behind damsels who appear to be in distress. Under the leadership of Marsha (Mia Goth), Ana trains as a sharpshooter and discovers a newfound freedom in this uninhibited sisterhood. But she soon senses she may not be the ruthless killer they expect, and time is running out for her to find a path home.

“Karen and I are long-time collaborators and also happen to be life partners,” said Levy. “Mayday is a project we developed together. When she first told me about her idea for this story I was instantly hooked. It felt innovative and audacious, something I simply had to help bring to life.”

“The Cooke Anamorphic/i SFs were well suited to this material,” said Levy. “They have a mysterious glow in the highlight. It reminds me of the way old Kodak Ektachrome film used to roll off in the highlight. In a subtle way this glow helped me create a visual language to bridge intimacy of the characters’ personal journey with the scope and sweep of an adventure film – as if Andrei Tarkovsky had directed an action movie. There was never a question in my mind that Mayday was an anamorphic movie. I worked very closely with Kavon and Kelly Samuels at Camtec in Los Angeles in choosing exactly the right set of Cookes. Camtec also went above and beyond in creating a custom infrared camera to shoot a special sequence in the film.” 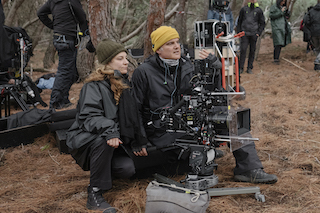 Most of Mayday was shot in Pula, a beautiful coastal city in Croatia. Together with his gifted DIT Sean Goller, Levy designed a bespoke digital dailies lab in several adjoining hotel rooms. “Each night we’d watch down the day’s work before setting our print lights and processing the dailies. In another room we’d then watch dailies from the previous day with Karen and editor Nick Ramirez.”

As one of the producers of this film, Levy could make sure the work was completely interactive. “The synergy we gained from this approach really shows up on screen. The metadata system inherent in the Cooke Anamorphic/i sensors helped us in this regard. The Cooke metadata system enabled me to record very specifically how we exposed each scene. I could then match this up with my light meter notes and lighting diagrams. I had to make certain that I was utilizing the lenses in the precise manner I’d prepared over several years of testing.” 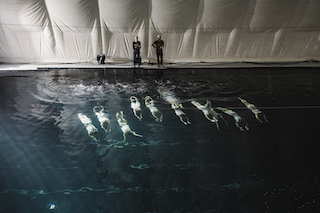 “The expressionistic quality of anamorphic is sometimes heavy-handed in narrative storytelling. For Mayday, the density of the anamorphic look was helpful in transporting the viewer to a place outside their reality. Cooke lenses traditionally embrace people’s faces in a pleasing way. The friendliness of the Cooke’s classical skin tones combined with the dazzling glow of the special flare coating put me in the perfect sweet spot to create great cinema.”

While many filmmakers have not shot in Croatia, Levy found the experience very positive. “I must give credit to our incredible Croatian crew; it was an honor to make Mayday in such a vibrant country with a rich history of filmmaking. Croatia welcomed us with open arms and the people were incredibly supportive of Karen and the material. In particular, I must thank focus puller Dinko Rupcic, second AC Filip Friscic, Key Grip Josip Mataušić and his grip team, best boy electric Joško Milic and his electrical team, plus my incredible American gaffer Jerry Mundy and the brilliant American DIT Sean Goller.”

Mayday premiered at Sundance in January 2021 – and was nominated for the Grand Jury Prize – but that meant audiences would be viewing the film on monitors at home.

“I had to pay much more attention than normal to the Rec. 709 pass for home video streaming,” explained Levy. “Our colourist Marcy Robinson was a fantastic guide when it came to dealing with how Mayday would be seen. For example, monitors can sustain a very dense shadow, while a projector organizes colors in a more mellifluous way, not as deep in the shadow area. Simply put, ‘monitor black’ is much more inky in contrast than ‘projector black’.” This is critical to protecting the integrity of Mayday’s image – like most films nowadays, most people will watch Mayday on a monitor and not projected.”

For his next project, Levy has already tested both special flare and regular anamorphics from Cooke. “I can’t talk about my next project, but rest assured, Cookes are always firmly in mind when I’m designing the look of any film.”