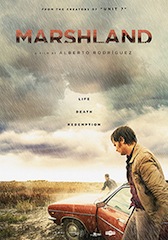 Mistika played an integral part throughout the whole filmmaking process of Marshland from pre-production, image-testing, LUTs inspection, ISO, densities through to complete post.

Best Special Effects nominee for his role as colorist and digital effects supervisor, Juan Ventura Pecellín said, “Mistika's impressive capabilities helped us to achieve a 100 percent realistic look which was nothing less than spectacular.”

Mistika's technology enabled the team to work at resolutions of 4K, up to 7K of complex aerial scenes for pre-visualization and color grading, coupled with intense car chase sequences that involved intricate light elements.

In addition, the film has received several other accolades including recognition as the Best Film in the Official Section at the San Sebastian International Film Festival, as well as the Silver Concha Award for Best Photography.

The 29th Goya Awards ceremony, will be hosted by actor-comedian Dani Rovira, and is scheduled to take place on February 7 at the Centro de Convenciones y Congresos Príncipe Felipe in Madrid to honor the world's top Spanish films of 2014.

View the official trailer of Marshland at www.youtube.com/watch?v=GErVX6VnJ2o