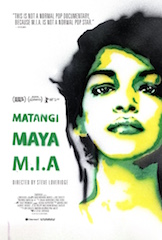 Abramorama and Cinereach have announced the release of the trailer for the kinetic and timely, documentary film Matangi Maya M.I.A. The movie opens in theatres September 21, in the U.K. and September 28 in the U.S.

Activist, mother, and style icon Maya Arulpragasam has been nominated for an Academy Award (for Slumdog Millionaire), a Grammy Award and The Mercury Prize. Raised in Sri Lanka, an 11-year-old Arulpragasam immigrated to the U.K. with her mother and siblings to escape the violence of Civil War. Drawn from a cache of never-before-seen personal video recordings from the past 22 years, director Steve Loveridge’s Matangi Maya M.I.A. is an intimate and eye-opening profile of M.I.A.‘s remarkable trajectory from young Tamil refugee to global pop star.

The film originally premiered at the 2018 Sundance Film Festival, where it won the World Cinema Documentary Special Jury Award, and has since screened at festivals across the U.S. including opening New Directors/New Films at the Museum of Modern Art in New York City, and internationally at Berlin, Hotdocs and beyond. The film is scored by Paul Hicks and George Harrison’s son, Dhani Harrison.