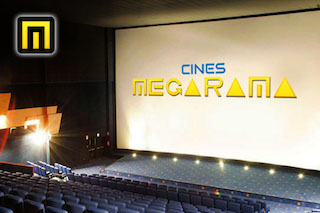 French cinema exhibitor Megarama has signed an agreement to install EclairColor HDR technology on 15 screens. “We will deploy the new EclairColor HDR technology at 10 of our cinema sites across France with the first two cinemas – Megarama Bordeaux and Megarama Villeneuve-La-Garenne – to be equipped in April,” said Jean-Pierre Lemoine, president and CEO of Megarama Group. “After laser technology, we are continuing to invest in the modernization of our own cinema equipment with EclairColor, a brand new, affordable HDR technology powered by Sony Digital Cinema 4K SRX-515 projection system technology. The benefits for moviegoers are real with a significantly enhanced image andan increased perception of details, the color range is much richer and the gradients much more refined, even in the darkest colors.”

“Following the recent announcement of our first 25 EclairColor screens in Germany, we are thrilled to seal this new alliance with French circuit Megarama, for the deployment of our HDR technology at ten of their cinema locations,” said Maxime Rigaud, managing director of CinemaNext France, Switzerland and Africa. “This is an important milestone for our company in the establishment of a powerful network of EclairColor screens in France, – with 41 already equipped or to come – allowing a greater number of moviegoers to take advantage and experience this new cinema standard.”

"The benefits EclairColor HDR technology offers are clearly visible to moviegoers as an affordable technology for any exhibitor since we have made this process compatible with a range of existing projectors,” said Vincent Bruère, account manager at CinemaNext France. “Megarama represents the largest EclairColor agreement to date by a cinema exhibitor, and we plan to maintain our business relationship at a high level. We will equip two new eight-screen cinema builds scheduled for an opening late 2017 at the Megarama Saint Gely and Megarama Montigny-lès-Cormeilles, respectively located near Montpellier and Paris, France.

EclairColor is a new digital HDR color solution that combines a mastering process and the optimization of select projection system technologies. All types of cinemas including independent movie theaters, regional chains and giant exhibition circuits, regardless of their screen size, can be equipped with EclairColor. The equipment can be used to run EclairColor mastered content as well as standard DCI content. To date, a total of 47 cinema screens are equipped with EclairColor: 21 in France, 25 in Germany and one in Tunisia.