When Light Iron CEO Michael Cioni made the move to Manhattan from Los Angeles this past January, he wasn’t worrying about finding a good rental opportunity. After all, without really having to search, he was already set up quite nicely at 580 Broadway after a few months renovation. In a real estate deal said to go off with minimum hassle, Cioni’s Light Iron had taken the eighth floor space held by OffHollywood’s post-production operations, which included a sleek digital intermediates grading theater. 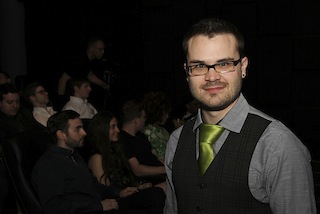 OffHollywood, founded by Cioni’s friends Mark Pederson and Aldey Sanchez, has gained a solid rep in production as the first facility to rent out Red systems in the city. Moving out of the highly competitive post market looked to be a smart move for OffHollywood. The company has since taken on Light Iron’s Outpost Mobile Systems, which offer on-site dailies, digital intermediate, archival, and data services for projects that originate on file-based motion cameras such as Red. OffHollywood becomes the exclusive provider of the systems.

Light Iron, in business for about three years, has already expanded into a second Hollywood location. From there it has sent its Outpost systems to work on projects including Helgeland’s 42, Fincher’s Justin Timberlake music video Suit & Tie, Zemeckis’ Flight, as well as a number of on-going cable series.

Not bad for a company just moving into its fourth year. Credit must be given to Cioni himself, a talkative, outgoing type who moved to Hollywood after finishing college and a stint at a PBS affiliate in his native Illinois.

“No one would believe a business this small could have such a large impact,” says Cioni. “You don't have to be a big company to do what we’ve been doing anymore, you just have to be smarter.” Self-confidence, a requisite for the small businessman, continues over into how he envisions the industry’s future.

That’s because Cioni spends a lot of time thinking and talking to others about the current state of production, and where it might go. Post houses turning out dailies won’t exist by 2017, he says in his Tumblr blog, for example. What’s more, his own company’s future, the rationale of why Light Iron makes its money today – audio sync, windowburns, watermarking, versioning, color space conversions and even the job of the digital imaging technician – will itself go away by 2021 as ever smarter cameras finish each day’s projects and sends it to cloud servers.  (http://michaelcioni.tumblr.com/ )

So why did Cioni think opening an office in New York was a good idea, when Los Angeles is still the place to be for feature work? “Fashion and television,” he says. The fashion market will quickly move to 4K production, Cioni speculates. Cable and network production will follow. Light Iron devices such as the Lily Pad offer a compact, price-competitive method for moving into setting and saving color looks on set in parallel with the latest camera systems from Arri, Red and Sony.

As the leading production centers, New York and Los Angeles look to be ideal markets for Light Iron. Productions on both coasts, of course, are smart in their constant search for ways to work with speed and deliver great results. Cioni, however, moved to New York to be close to his latest market. He thinks there’s a challenge in convincing some producers that it’s wise to put money into systems that don’t fit into the usual camera, sound and lighting slots. 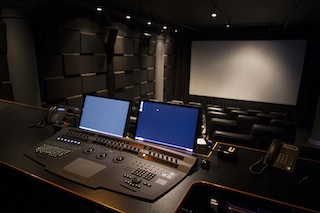 “Someone's got to lead digital cinema, 4K, UHD (Ultra High Definition), and raw image capture,” says Cioni. “Someone's got to lead, but we can't rely on the big companies to do that. The big companies are invested in legacy ideas, legacy talent and legacy tools. They're the ones who originally said ‘you should shoot film, don't shoot digital, you should shoot RGB, you shouldn’t shoot Raw’. They're also the ones who said that HD, and then 2K is good enough. Some of these same people say 4K will never make it to the home, and the web will never be high quality. I’m here to tell them that these things are going to happen and they're going to happen way sooner than most people think.”

Changing the way the production community thinks is a core concern of Cioni’s. Education isn’t handled by passing around a few brochures, but a constant rationale for Light Iron’s very existence.

That concern was top of the agenda even during Light Iron’s opening party in mid May. Every 15 minutes or so a group of party goers would pile into the screening room to hear Cioni give a history on the development of modern media production, why it was important to prepare for what was coming, and how his company would be one of the leaders in helping productions make the full transition to file-based production.

At those sessions, he talked up Light Iron’s weekly courses, when OutPost University fires up every Saturday morning at 10 am. The free lectures, open to all whether you’re a customer or not, offer an overview of file-based production, best practices for improving the handoff to post, strategies for storage and archiving, and optimizing Look management.

Questioned as to why the CEO of a company felt it necessary to spend time at his opening party educating all and sundry who came though the door rather than say, chatting up powerful clients, Cioni said "Education is important to me. We want people to stir a little bit in their minds, and ask what does this mean, what can I do with it?"

He went on to say that education is the “missing component” in digital cinema. The cameras and other digital technology are exciting, “but people are missing information and that's what they need the most,” he says. “Our tools and technology are so advanced that what they do is over most people's heads. Light Iron has invested a tremendous amount of effort into education. We are trying to help the production community become a more IT centric group because on the whole they are not.”

The latest cameras have more in common to supercomputers than to prior film-based, analog technology. The production community, only concerned with the next job sitting in front of them, doesn’t know how to integrate that technology. That’s where Light Iron comes in. 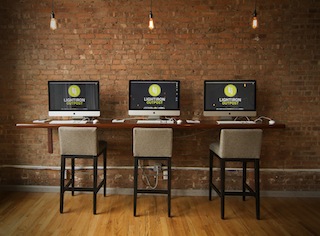 “We have the most robust, production-based data management training in the world, hands down,” Cioni says. “We have footage, training stations, and 500-slide iPad tutorials for students. If you can't make the class, you can come back later on whenever your schedule allows."

What’s in store for a company with such a forward-looking take on the future? Digital cinema production will take advantage of the smarts built into cameras—Cioni calls those innards ‘supercomputers’—and connect out to our increasingly cloud-connected world. Devices that Light Iron designs will speed all of that up, marrying audio tracks to each take, applying color Look-up tables on the fly to RAW footage, and uploading each take to cloud storage for everyone on the production to access.

“In cinema, all of that used to be an overnight process,” says Cioni. “Now digital cinema is getting closer and closer to becoming a real-time process, one that’s handled close to the set. That means that we’ll soon have a similar turnaround as a broadcast production does.”

Looking further into the future, Light Iron is at work marshaling “massive automation”. “We already have more automation in our systems than anybody else simply because we've been at this the longest,” says Cioni.

So a couple of years down the road expect to see a producer walking off the set each day with an iPad that holds an up to date view of the entire project. She’ll be smiling—or perhaps frowning if the production isn’t going well—as she looks over that iPad, with its sound-synced, color-corrected rough cut of the day’s session. You won’t be too surprised, if you’re that producer. You’ll know the future is here already. Michael Cioni has prepared you for that.

Dan Ochiva is a journalist living in New York. He's the founder of the website NYC Production & Post News (http://nycppnews.com)