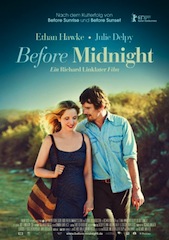 It’s been such a very long day.  In the eighteen years from Before Sunrise to Before Midnight, Celine (Julie Delpy) and Jesse (Ethan Hawke) have been talking about themselves, their lives, their problems.  They’ve been having sex, falling in love, having children.  They’ve gone from Vienna through Paris and now they’re in Greece.  Have they made any progress?  Is there any reason to see this movie?  Well, that depends.  I’ve long believed that the movies you connect most closely with are not just about their characters and their story, they’re not just about what’s going on in them – they’re just as much about your story and your character, and about what’s going on in you.  And in that sense, I would ask you a question:  Are you now – or have you ever been – in a long-term relationship?  Because if you’ve walked the furrows and the fault lines in a relationship like that, this movie is not only for you, it’s also at least partly about you. This is a Richard Linklater film and his work is not for everyone – or even for most people.  And to even further limit his audience – this is his mature work.  But, if you have made it through the long days of your own relationship, you may enjoy these very long dialogs by two people who may not be much different at the end than they were at the beginning; yet there’s catharsis in their conversation, and real commitment in their union. This is essentially 109 minutes of two people talking to one another, but it just feels so knowing, so real, if only because you may see yourself in this movie.