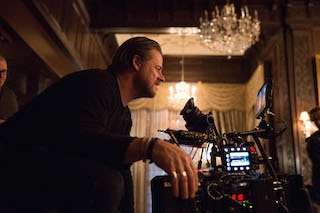 Based on the acclaimed Dark Horse action noir graphic novel, Polar: Came From the Cold by Victor Santos, the Netflix feature film Polar was directed by Jonas Åkerlund (Lords of Chaos) and shot by cinematographer Pär M. Ekberg with Panasonic VariCam Pure cinema cameras. Born and raised in Sweden, Ekberg got his start as a still photographer at a young age and eventually transitioned into cinematography. He has shot features, commercials and music videos for established artists such as Beyoncé, Pink, Lady Gaga, Taylor Swift, Katy Perry and U2, and many others.

In Polar, the world’s top assassin, Duncan Vizla (Mads Mikkelsen), aka The Black Kaiser, is settling into retirement when his former employer marks him as a liability. Against his will, Vizla returns to the business and faces off with a group of younger, faster and ruthless killers who will stop at nothing to have him killed. The action thriller also stars Vanessa Hudgens, Katheryn Winnick, Fei Ren, and many others.

Åkerlund’s vision for Polar is mixed with intense realism and comic book surrealism. “Pär and I have a very long relationship – we have worked together for over 30 years,” says Åkerlund in the film’s press notes. “We’re very old school in how we light and in how we work. We try to do as much as we can in-camera and we work mostly on location. We try to work with as much practical light as we can. To me, all these things together give a rawness and a realness that I like in my movies. And Pär is very much on board with this.” 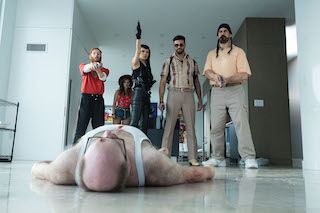 For Ekberg, there were many challenges – shooting in multiple locations, dealing with snowstorms, and intense action scenes involving both fighting and shooting. “For me, the biggest challenge was finding a visual balance between Duncan’s two worlds,” says Ekberg. “The weird colorful, violent world that he tries to leave behind, and the new more toned down, realistic one that he tries to set his new life up in. To convey that and still keep the elements of the graphic novel was a big challenge.”

Ekberg wasn’t familiar with the Santos graphic novel, but he read it to see if he could acquire additional visual inspiration. “We knew early on that we didn’t want to make it seem silly or stylized in the wrong way, but we still wanted to put elements of the graphic novel into the film,” says Ekberg. “We tried to find that balance with different references, as well as a lot of discussions and tests. If you look at these graphic novels, images are graphically presented in colors and composition but also through collages on each page where you might go from an extreme close-up of a face to a wide landscape. That kind of storytelling where it’s pieced together with different, dramatic sizes of scope. I think that was the big inspiration I received from reading the novel.”

Ekberg’s color inspiration came from still photography and films. “We wanted to mix his (Vizla’s) old world, which is very colorful and twisted to something more realistic. It wasn’t exactly from the graphic novel but close to visuals that Jonas and I have explored before. We like adding a lot of strong color themes into the storytelling.”

Ekberg tested the VariCam Pure, but also cameras from Arri, Sony and Red. Right off the bat, Ekberg was very impressed with the picture the Pure delivered. “The Pure gave me the opportunity to shoot high-speed 4K without cropping,” explains Ekberg. “There was also the Dual ISO capability that I took advantage of frequently. The Pure’s color has a sharp but silky texture to it that I really enjoy, and it really fits my frame of reference.” 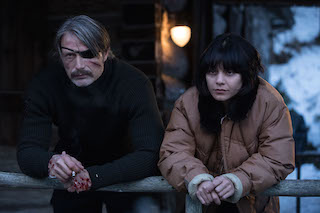 Ekberg captured 4K (4096 x 2160) V-Raw files at 23.98-fps all the way up to 120-fps. Rented from Sim in Toronto, Ekberg employed three VariCam Pure bodies with A and B cameras working on the main set and a third shooting second unit or splinter unit sequences. Although he did make use of camera dollies, drones, and Steadicam, Ekberg said most of the film was captured handheld for more dynamic shots.

For lenses, Ekberg used a combination of Zeiss Ultra primes, as well as Zeiss Super Speeds. “The Ultra Primes were my workhorse lenses,” says Ekberg. “I am a big fan of that glass. It has very nice color and nice texture. It just fits me because it’s very straightforward and clean. I know exactly what they’re doing, and I like the kind of image they deliver.

“This film was shot just slightly stopped down,” continues Ekberg, “so I would say most of this film landed somewhere at around a T-4. It gives you just a little bit of edge and you still get shallow focus to tell the story that way.”

Since he was working in multiple locations, Ekberg did not have a single technique or philosophy on lighting Polar. He had to mix and match lighting sources depending on the situation. “It was a mix of light sources and locations from big exteriors, night and day, and we pulled every tool out of the box to make it happen,” says Ekberg. “There were also locations where there were tons of practical lights that I could use. Sometimes I wanted things colorful, so I had to add color. It was a big mix of lighting techniques and tools. 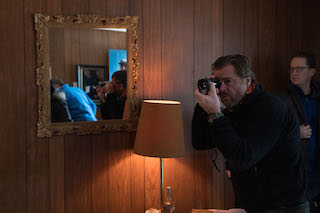 “There was a lot of coverage on all of the actions sequences,” continues Ekberg, “so I tried to figure out a basic lighting set up that would work for me on specific locations. I didn’t want to spend a lot of time re-rigging. I needed all the time I could get to shoot scenes. I tried to figure out a general plan that would work for most of the stuff on that specific location, which usually means big sources and cranes. It worked well, and we moved quickly. We used a mix of sources – everything from the biggest HMI to the smallest LED – and everything in between.”

Using the VariCam’s Dual ISO technology, Ekberg shot most of the film at Native 800 ISO but for low light situations or high-speed situations, he shot at 5000 Base and cranked it back down to 3200. “It gave me two more stops without adding any annoying noise, or weird artifacts or color,” he explains. “There were no visible downsides to it. If we ran out of time, or light, whatever the reason was, I had an extra gear to put in whenever needed. It looks beautiful and it works really well.”

Polar was posted in Toronto at Deluxe and the colorist was Bill Ferwerda. Because of Ekberg’s precise testing, he was able to keep track of the material during the shoot. “The look was set before we went into post, but it still felt like we were starting from scratch, even though the results straight out of camera was close to what we intended. I was really helped by all the work we did prior to the shoot. We had a very clear path and we followed it.”

For the Netflix release, Polar was also graded in Dolby Vision for high dynamic range delivery. Ekberg did not change his production approach, even with the knowledge of having increased dynamic range for the HDR delivery. “Although it did not change my approach, it certainly changed my view on post-production and what HDR actually does,” says Ekberg. “After watching HDR on a proper monitor at the post facility, it was very hard to go back and look at SDR. The only problem I had was compromising to make the SDR look OK. HDR is highly addictive. The fact that I will get such richness in the low register and especially the highlights is amazing.

“It was a very adventurous job and we shot a lot,” says Ekberg. “I am very happy with the VariCam because it delivered exactly what I wanted it to do. I think the final product is excellent.”