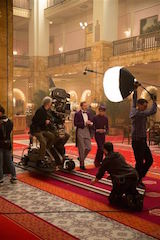 Post-production companies of all sizes rely on Signiant’s file transfer software to move their large digital assets quickly and securely between teams distributed around the world, and Modern VideoFilm’s latest work takes the scale and reach of distributed finishing to new levels.

Signiant’s accelerated file movement technology has been an integral part of Modern’s file-based workflows for hundreds of projects over the last eight years. Most recently, Signiant technology played a critical role in Modern’s involvement in such high-profile projects as the Academy Award-winning film The Grand Budapest Hotel and Dig, the new ten-part television event on USA Network.

“Our business is global, with creative professionals located in every corner of the world,” said Mark Smirnoff, president, creative services, Modern VideoFilm. “We have relied on Signiant for several years to manage efficient content exchange between locations, and our reliance on the technology continues to grow. Whether for television or film, today’s post production projects involve ever-increasing amounts of data, complex workflows, and the tight timelines that have always defined our industry.”

The Grand Budapest Hotel: Modern provided a range of finishing services for the Fox Searchlight Pictures film, including scanning, color grading, editorial conforming and visual effects. With the help of Signiant, Modern was able to manage a highly-distributed workflow, including post-production work spanning seven months and two continents. The movie was shot in locations across Europe, and involved a long-distance workflow with the editorial team based in Burbank, CA and Kent, England, the color grading team split between Burbank and London, and the director, Wes Anderson, located in Paris. Modern also collaborated with a visual effects partner in Germany. Via Signiant software, Modern’s Burbank team could receive dailies in a matter of hours. They collaborated with Anderson on edits and then, again with the help of Signiant technology, sent files as large as 3 TB for review in London by the next morning. A total of about 10 TB was transferred between Burbank and London.

Dig: During the course of the first season of Universal Cable Productions’ event series Dig which was shot over 103 days, Modern VideoFilm processed 400 hours of footage, totaling over 51 TB of data. They also produced more than 33 TB of promotional content and approximately 6 TB of editorial deliverables. Moving all of these files between locations was made possible with the help of Signiant. With filming in Israel, Croatia, and Albuquerque, New Mexico, footage often had to be sent from hotel rooms using 50 MB and 200 MB lines – and had to arrive in to Burbank within a few hours for processing prior to being sent on to the editorial team in Hollywood.

“Film and television projects today span multiple countries and continents, but the central hub is often here in Los Angeles,” said Gregory Eansor, vice president, Western U.S. at Signiant. “Signiant’s business in the local post production community is growing by leaps and bounds, and the success of Modern’s recent innovative projects points to the power of our technology to facilitate distributed workflows.”