Modern VideoFilm Accompanies Sons of Anarchy on Its Final Ride 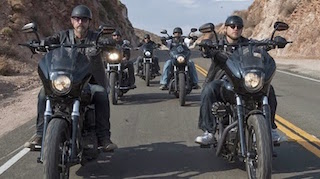 Modern VideoFilm recently wrapped up a seven-year run as a post-production services provider for FX’s hugely popular series Sons of Anarchy. The Burbank-based facility set up a file-based pipeline for the show, about a motorcycle club based in Northern California, integrating editorial finishing, visual effects, color grading and deliverables. Despite a tight schedule and complex VFX and grading requirements, Modern efficiently delivered a stellar product each week of the show’s long run.

“Our television workflow is the best I’ve ever seen,” says online editor Jay Robinson. “We all work from linked files allowing elements to move from editorial to VFX to color and back again very smoothly. It’s seamless.”

The show’s visual effects needs were often complex and challenging, and ran the gamut from rig removal and clean up to intricate digital matte paintings. David Carriker acted as Modern VideoFilm’s visual effects supervisor, working with the production team in designing and planning effects elements, and overseeing the team of artists who carried them out.

“Ninety-eight percent of the digital visual effects for the show were produced here at Modern,” Carriker recalls. “Part of my role was to provide on-set supervision for complex shots. I visited the set four or five times each season to work with the director and DP, and ensure we got the plates we needed.”

Given the often violent nature of the show, it is perhaps not surprising that one of the most common visual effects was blood. Gun battles, knife fights and other action scenes were often enhanced for dramatic effect. VFX artist Bill Coffin explains, “I put muzzle flashes in guns. I put bullet holes in people.  I did blood spurts, pools of blood, blood oozing and dripping. I cut people’s throats. I once put an ice pick in a guy’s ear.”

He adds that such grizzly effects were never routine. “The effects required a lot of creative thinking and careful execution,” he says. “We looked at each one as a puzzle and attacked it piece by piece.” 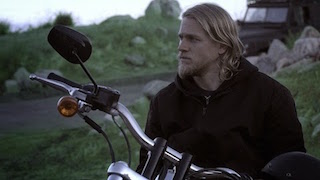 Carriker notes that Modern has an insert stage that often came in handy for shooting practical elements for effects use. “We might need a piece of denim soaked in blood,” he says. “So, we’d go onto our stage and shoot the props. Five minutes later, it would be in the show.”

Although Sons of Anarchy is set in a fictional town in California’s Central Valley principal photography was shot on a stage in North Hollywood with many exteriors shot in nearby Sun Valley and Tujunga. As a result, background environments needed to be augmented or replaced.

A number of episodes from season three were set in Northern Ireland. Although some exteriors were shot there, others were shot in California and digitally altered. Carriker recalls a scene involving a group of motorcycle riders on a rural highway. “For the first part of the shot, they are on a road in Northern Ireland, but when they come around a corner, they are in Chatsworth,” he notes. “In the production footage everything was brown! Artists spent a week coloring every hillside and every bush. In the end, it looked lush and green. It looked like Ireland.”

For Modern VideoFilm, the arrival of the show’s finale was bittersweet. “We were all big fans,” Carriker says. “I sometimes stayed out of the effects room because I didn’t want to know what happens.”

However, the end of the show has not meant a respite for Carriker and the other members of the team. They are busy with a number of other shows, including Modern Family, Madam Secretary and Fresh off the Boat. “We’ll miss Sons of Anarchy,” Carriker observes. “But now it’s on to the next big thing.”