Additionally, Modern VideoFilm teamed with the Sundance Institute in producing a new digital restoration Paris Is Burning, Jennie Livingston’s exuberant documentary about black and Latino drag queens in New York City in the 1980s. A special screening of the restored DCP master will be held at Sundance to mark the film’s 25th Anniversary.

Much of the film was shot in Michigan during winter (with additional units in Minneapolis, at The Mall of America, and New York City). According to Ponsoldt, the snowy, rural environments provide an emotional counterpoint to the tenuous relationship that develops between Lipsky and Wallace. “A lot of films set in winter play into the oppressive or dark, brutal qualities of the weather,” recalls Ponsoldt. “What was important to us was to bring in the romance of winter and snow.” 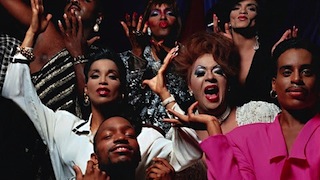 Ponsoldt adds that he believes those qualities are best captured on film. “Nothing equals film as far as emotionality and texture,” he says.

During the grading process, McMahan, whose previous credits include The Tree of Life and Killer Joe, sought to bring out the nuance captured by Ihre in the winter exteriors and the vibrant colors featured in contrasting interior scenes. “They shot a lot of areas with snow,” McMahan observes. “So, we were often working with white-on-white. Film holds details in those environments that you might lose in digital.”

“It was a pleasure to work with Bryan,” says Ponsoldt. “He brought out the wonderful qualities in Jakob’s cinematography. Bryan is a true artist and a great collaborator.”

The restoration of Paris Is Burning was produced from new scans of original 16mm film elements. During initial grading sessions, Modern VideoFilm colorist Gregg Garvin had access to a 35mm print, produced at the time of the film’s original release, and a video transfer produced a decade ago under Livingston’s direction for reference. Final grading was conducted under Livingston’s direct supervision.

“It turned out beautifully,” says Garvin. “Having two reference copies and the director’s input was a big advantage. It’s a very colorful film.”

Paris Is Burning is included in The Sundance Collection at UCLA. Modern VideoFilm provided restoration services for another film from the collection, Hoop Dreams that screened at last year’s Sundance Film Festival. This year’s festival is slated for January 22 through February 1 in Park City, Utah.