Modus FX Creates Catastrophes for This Is The End 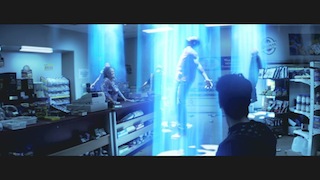 This Is The End follows six friends trapped in a house after a series of strange and catastrophic events devastate Los Angeles. As the world unravels outside, dwindling supplies and cabin fever threaten to tear apart the friendships inside. Eventually, they are forced to leave the house, facing their fate and the true meaning of friendship and redemption. The film is written and directed by Seth Rogen and Evan Goldberg and stars James Franco, Jonah Hill, Seth Rogen, Jay Baruchel, Danny McBride, Craig Robinson, with Michael Cera and Emma Watson. The film is produced by Seth Rogen, Evan Goldberg and James Weaver.

To bring the story to life, Modus FX created cataclysmic environments, a range of CG monsters, Rapture lights, and other effects to convey catastrophe amid the comedic antics of the ensemble cast.

New Orleans, where the film was shot entirely on location, needed to be transformed into Los Angeles for the big screen. Modus created concepts and previs on site during preproduction for weeks before shooting began.

“The movie is about a series of catastrophic events,” said Yanick Wilisky, VFX executive supervisor for Modus on This Is The End. “Because of the visual scale of the film, we wanted to maximize the efficiency of the post-production pipeline, as well as the quality of the results, by working with Paul Linden, VFX supervisor and VFX producer, the directors and production team right from the beginning of the process.”

The action opens with two characters entering a convenience store just as an earthquake hits Los Angeles. High winds blow and trees fall in front of the store as people are running to get away. Rays of blue light shine down from the clouds, lifting the Chosen to safety, while the many left behind look on in horror, left to their fate.

“We started designing and experimenting for this whole sequence even when the movie was still in the development stage,” said Wilisky. “Tons of research went into this scene so that, when we got to New Orleans, we had a pretty good idea of how we would film it.”

A huge crane was used to shine a high-intensity spotlight from above while another crane lifted the “saved” Angelinos into the air. This gave Modus a visual starting point, to which they added elements to enhance the look while removing the wires and attachments that pulled the actors up. 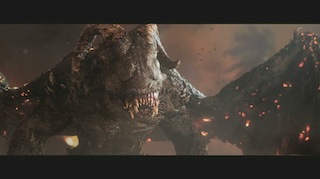 “The perfect house was found for the shoot, a residence that Modus converted into a home on the Hollywood hills near Sunset Boulevard overlooking the lights of Los Angeles,” said Wilisky. “We added a CG second floor and expanded the hallways with digital set extensions.”

News reports of natural disasters begin coming in, frightening sounds are heard from outside and what appeared to be a simple earthquake becomes a sequence of events. The partygoers move onto the front lawn where they find themselves on the edge of a giant sinkhole. In the distance, fire rages in the hills, engulfing homes, forests, and, of course, the famous Hollywood sign.

“We did the previs for this sequence before work on the movie had even begun, and it really helped us to plan the shoot ahead,” said Wilisky. “We did a couple of versions for Paul, Seth and Evan until they loved it. Paul had the idea to reverse the normal process, moving a camera around stationary actors to give the illusion that they were falling down the hellhole. Modus then used previs data to show the expected movement during shooting.”

The environments were matte painted and the sinkhole generated by the earthquake was created in Softimage, while the crumbling of the ground was simulated in Maya and then transferred to Softimage for the final render. 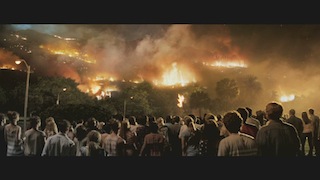 Fortunately, James Weaver, producer on the film, as well as Rogen and Goldberg, believed in the advantages of getting the VFX facility involved in early concept work. Modus was glad to be involved in production meetings with heads of all the departments in preproduction to go over the previs and plan the shoot.

“Paul would show Seth and Evan camera angles proposed by Modus, which made it easier for them to figure out the sequence of shots, how they were going to film them, the timing, how many shots there would be and whether it would all work according to the production schedule,” said Wilisky. “The directors were using previs as a tool to give them an idea of the type of camera angles to use before shooting or as an inspiration.”

After Modus FX did this previs, they gave it to the stunt coordinator, Steve Ritzi, who completed all the stunt choreography, shot by shot. “This brought the previs work to another level,” explained Wilisky. “When we got to the set, all of the stunts were already choreographed and everyone knew what angles to use for the shots.”

“This film was a great experience for us,” Wilisky said. “I found New Orleans magical and the set warm and inviting. We’d hear Seth’s contagious laugh in the huge warehouse first thing in the morning and the crew would know, that’s it, we’re starting. The positive attitude on the set spilled over into the movie. It’s dynamic, fun and audiences are going to love it.”

“This Is The End marks a real maturation for Modus,” said Wilisky. “We’ve gone from perfecting subtle effects and creatures to acting as a main vendor for this VFX-heavy feature-length movie. It’s really an exciting time for us.”