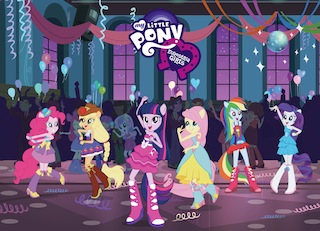 More2Screen has been appointed by Hasbro Studios to distribute a new full-length feature that will introduce a whole new dimension to the hugely successful My Little Pony brand. My Little Pony Equestria Girls will be available dubbed in multiple languages and released in cinemas across Europe, and selected international territories, from August 1.

My Little Pony Equestria Girls builds on the momentum of the extremely popular My Little Pony: Friendship Is Magic animated series, which is currently on air in more than 170 countries and ranks in the top five programs for its key demographic.

In My Little Pony Equestria Girls, Twilight Sparkle’s crown is stolen from the Crystal Empire, and she must pursue the thief into an alternate world where she transforms into a teenage girl who must survive her biggest challenge yet…high school. With help from her new friends who remind her of Ponyville’s Applejack, Rarity, Rainbow Dash, Pinkie Pie and Fluttershy, she embarks upon a quest to find the crown and change the destiny of these two parallel worlds.

Christine Costello, managing director, More2Screen says, " My Little Pony is a phenomenally successful worldwide brand and we’re delighted to be working with Hasbro Studios to bring this brand-new feature, My Little Pony Equestria Girls, to our exhibition partners across Europe and selected international territories. This release gives cinemas a fantastic programming opportunity for children at weekends and during schools holidays, and is a very welcome addition to our wide-ranging portfolio of content.”

Finn Arnesen, senior vice president international distribution and development, Hasbro Studios says, “My Little Pony is a much-loved global brand and we know its many fans will be very excited to watch My Little Pony Equestria Girls on the big screen.  With their worldwide network of exhibition partners, More2Screen is perfectly placed to roll-out the international theatrical distribution for this much-anticipated new feature.”