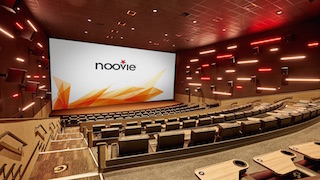 New research from cinema advertising company National CineMedia shows that a vast majority of regular moviegoers – 95 percent – miss seeing movies in theatres. The survey, which was taken on March 20 and again on April 20, showed that a sizable majority – 86 percent – prefers watching a movie in a theatre to streaming a movie at home.

The survey was conducted with NCM’s Behind the Screens panel, a community of 5000 movie patrons. Communicating regularly with the group has enabled NCM to gain a deep understanding of movie audiences’ preferences and motivations since 2015.

NCM checked in with them on March 20 for a first wave of research to get their take on the emerging Covid-19 situation, and checked back in with them again on April 20 for a second wave. The goal was to see how they were holding up and to get their thoughts on movie-going, COVID-19’s impact on life and activities, and how they’re getting their movie fix at home with streaming service subscriptions.

Here are some highlights:

While streaming is nice (and necessary at the moment), movie fans tell NCM that they much prefer going to the theatre to see a movie:

Of note, 89 percent of the core moviegoing demographic of adults 18-34 said they prefer watching movies at the theatre, a statistically significant increase versus wave 1 (77 percent)

More than 90 percent are looking forward to theatres reopening

When movie theatres reopen, three out of four respondents plan to go to the movies the same or more frequently than before

The top movies that fans are most looking forward to seeing when theatres reopen were Wonder Woman 1984, Black Widow, Mulan, No Time to Die, Top Gun: Maverick, and A Quiet Place Part II.

Since orders for social distancing began being issued around the country, 25 percent of movie fans said that they have subscribed, or plan to subscribe, to at least one more streaming service to get their movie fix at home while theatres remain temporarily closed.

Streaming/Watching Movies was the number one choice of activity for people sheltering in place at home, followed by Binge Watching TV Shows, Listening to Music, Shopping Online, and Video Chatting With Friends.