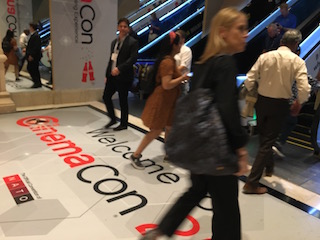 Thousands of people from around the world who work in the motion picture industry were supposed to be at Caesar’s Palace in Las Vegas this week for CinemaCon 2020. Instead we are all, for the most part, dealing with the COVID-19 crisis by staying home, washing our hands frequently and practicing social distancing. With the vast majority of the world’s movie theatres closed until further notice and movie production at a standstill, many people are out of work and worrying about when, or if, they will get paid again. With that in mind, I reached out via email to Patrick Corcoran, the National Association of Theatre Owners vice president & chief communications officer, to see how NATO and its members are responding to the crisis.

Digital Cinema Report: What has been the direct short-term impact on NATO of cancelling CinemaCon 2020?

Patrick Corcoran: Primarily the disappointment of not being able to put on a great show for the industry. For the studios, they’ve had to forgo the massive media attention CinemaCon brings to their slates. Our tradeshow vendors and members miss opportunities to network and see the innovations in presentation and amenities and concessions. There are, of course, financial and administrative costs, but many trade show vendors have taken the opportunity to transfer their 2020 payments to reserve spots in 2021, which is encouraging.

DCR: How do you think cancelling the show one time might impact NATO long term?

PC: We don’t see any long-term effect from this year’s cancellation.

DCR: NATO recently committed to spending a million dollars to support its members. How will that money be spent and have you begun dispensing it?

PC: We partnered with the Will Rogers Motion Picture Pioneers and their Pioneers Assistance Fund to grow that assistance to $2.4 million and we encourage those in our industry who can to contribute to it. The Fund became active on March 30. The initial phase provides $300 stipends to movie theatre employees who have been employed for five or more years and need emergency assistance due to COVID-19. That will expand as needs and funding grow.

DCR: In addition to the million-dollar fund, how is NATO directly helping members?

PC: We have been lobbying vigorously on their behalf to make sure that theatre owners and their employees were included in the recently passed CARES Act. We are actively working to educate our members on what aid they are eligible for and how to apply for it. We continue to lobby the Treasury Department and [the Small Business Administration] to help expedite that relief.

DCR: How will the recently passed government relief package affect your members or is it too early to tell?

PC: It does two things. One, it provides unemployment insurance and direct advanced tax refunds to our employees while movie theatres are closed and generating zero revenue. Two, it provides liquidity through loan guarantees and direct loans to companies of all sizes to pay for leases, mortgages, and other fixed costs until we can re-open again. The money hasn’t started flowing, but will soon.

DCR: What are member theatres doing to help their salaried and hourly employees?

PC: Some are able to retain employees for the time being or to continue providing health insurance to some of their employees. Others are selling concessions to put a little money in their workers’ pockets. Others have set up their own relief fund. It varies widely. This is a cash flow-intensive business and without that cash, it is very hard to pay workers. That is why the CARES Act is so important.

DCR: Much has been written about Universal’s decision to release DreamWorks Animation’s Trolls World Tour direct to digital on the same day the movie will screen in whatever theatres around the world are open. NATO was quite clear in condemning the move. What is NATO’s relationship with Universal today and what is your relationship with the other studios?

PC: We are in contact with all the studios about their release plans and with the exception of Trolls, the response of the studios has been quite encouraging. They understand what we are going through and they are going through it, too. They have made some earlier than usual moves to the home market, which we fully understand. Theatres are not open and the studios need revenue. But studios are in the theatrical business and the movies they have slated need theatrical success to have financial success. Movie are delayed and when we reopen, they will be there for audiences.

DCR: It seems sadly likely that at least some movie theatres won’t survive the financial burden of this crisis. Do you have any estimates yet as to how many theatres might not reopen when this is over?

PC: There is no way to make that estimate right now. Since this is the Digital Cinema Report, it bears reminding your readers that at least ten percent of theatres were not expected to survive the digital transition. The real number was probably one percent and overall there are more theatres and screens than there were when the transition began.

DCR: In recent weeks China opened several movie theatres only to close many again a short time later. What is your best assessment as to when U.S. exhibitors might be able to reopen?

PC: The Chinese reopening was uncoordinated and unsupported by major releases. Our members will follow the guidance of local health officials before they make any determination of when and where theatres reopen. While this pandemic has hit regions unevenly and at different times, we are a national – indeed international – industry and our film supply depends on national and international releases. The course of the pandemic and careful coordination with our studio partners will determine when we can successfully reopen.