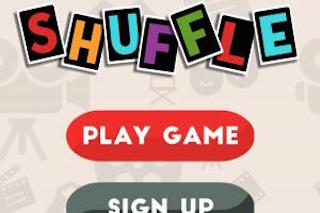 At CinemaCon this week National CineMedia, creators of the Noovie pre-show seen in movie theaters nationwide, unveiled their new movie trivia mobile game Shuffle. Designed as a web app at www.noovie.com/shuffle, Shuffle is a whirlwind collection of card-based movie-trivia mini-games where players must answer questions as quickly as possible to earn points before time runs out. Questions will come fast and furious, and players will be sorting, flinging, and swiping cards at a breakneck pace to accumulate points and earn the best score. Movie fans can test their Hollywood IQ anytime, anywhere, with a fun mix of challenging Shuffle trivia games based on their favorite films.

Flicks – As new movie cards come up in the deck, quickly swipe the card left or right to answer a yes/no question.

Star Chains – Find the connection between movies and actors to create a chain of correct answers. The longer the chain, the higher the points.

Match Up – Correctly match 3 pairs of movie-related cards. The faster you are, the more sets you get to match and win.

Timeline – Which came first? Decide if an event happened before or after another event, such as the year a movie was released or the plot sequence of a story.

Bonus Round – Click on as many cards as you can that fit a given movie category before they disappear.

Movie fans can see how they rank against other Shuffle players, create head-to-head challenges with friends and share their score on Facebook and Twitter. Early adopters of Shuffle will get the opportunity to practice and hone their skills to get ready to win cool rewards and prizes, which will be rolling out later this year.

“Movie trivia is one thing that our Noovie audiences told us they crave the most, and Shuffle lets people not only play in the theater while they’re waiting for the movie to start, but anytime, anywhere they want to test their movie knowledge,” said National CineMedia’s president and interim CEO Cliff Marks.

Marks continued, “Ninety-three percent of the moviegoers we surveyed told us that they’d love to play a movie trivia game, but only eighteen percent had one that they currently enjoyed playing on their phones. So, we designed Shuffle to be addictively fun, convenient, and competitive – the more you play, the more great movie content you get to unlock. I can’t wait to share it with millions of movie fans across the country beginning on April 26th.”