National CineMedia has partnered with Twitter and Disney to feature Rogue One trailer assets and fan tweets on NCM's Lobby Entertainment Network of screens strategically located near the box office and other high-traffic lobby locations in select movie theatres nationwide. “This is our way of reimagining the lobby experience,” said NCM president Cliff Marks.

“Many people look to Twitter to discover something new, and a large percentage of millennial moviegoers go to the theatre undecided about what to see,” Marks said. “This gave us a prime opportunity to bring what people are tweeting about Rogue One directly to the box office line to connect these moviegoers with other fans, especially since NCM research shows that social media really matters in the movie-going experience of this generation. In fact, 30 percent of millennials saw a movie in the last six months based on a social media recommendation.” 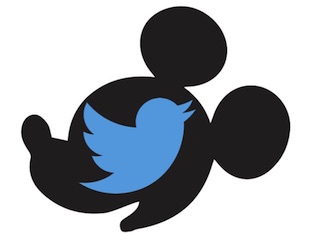 Marks added, “This is a pioneering program to bring Twitter sentiment directly into the box office. We’re excited to be partnering with Twitter and Disney to re-imagine what cinema advertising can look like and be on the forefront of digital advances that allow brands and audiences to share the magic of the movies.”

The effort began running at 57 theater locations nationwide on December 2 and will continue through January 5. This is yet another effort and fresh new take on Twitter bringing people what’s unfolding through new venues, and it is just the beginning of NCM exploring how cinema advertising can evolve to relate to a whole new generation of moviegoers.

The National CineMedia effort coincides with a similar collaboration that Disney is running with Twitter and People magazine. In that experiment, a live stream, hosted by People, features the debut of never-before-seen content from Rogue One followed by behind-the-scenes material and a Q&A with the director and cast members from the film.

The experience gives Star Wars fans a sneak peek of the highly anticipated film ahead of its December 16 release date. Marks emphasized that, for now, the NCM effort won’t feature any live tweets, although he suggested, “That’s where we may go with this.” 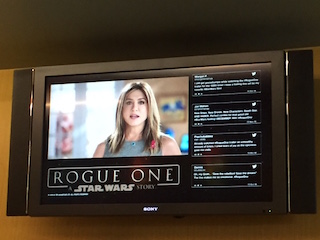 “There’s a natural merging of movies and social media,” he said. “Twitter has become social currency.” Although older patrons don’t necessarily rely on social media to choose what movie to see, the excitement generated in a lobby over one particular title could sway decisions.

Marks said there’s no risk of detracting from the movies being screened inside the theatre. He said all the lobby content was carefully curated, adding, “Our social media and marketing programs are always going to be movie related.”

“We’re looking to innovate in the lobbies,” Marks said. To date, the large screens in NCM lobbies have featured passive content. The challenge today is how to make the lobby experience better. “What better way than partnering with Twitter and Disney on Rogue One?”

Marks said that Disney and Twitter have specific criteria by which they will determine if the experiment is a success but he was not at liberty to share what they are. The results will be known by the first quarter of 2017 but will not necessarily be made public.

Marks sees a lot of potential in the collaboration with Twitter and Disney. “This could be a very powerful marketing tool for the studios,” he said.