A New Day for The Twilight Theatre 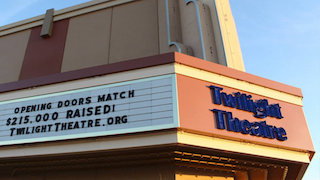 A Kansas town devastated by a major tornado in 2007 has rebuilt its historic theatre, lighting up its giant screen with a digital cinema projector donated by Christie. The projector illuminates the 58-foot-wide screen of the Twilight Theatre and Community Auditorium in Greensburg, Kansas, which is part of Kiowa County – about 100 miles west of Wichita.  The theatre celebrated its grand reopening the weekend of April 24 with a red carpet-style opening night, featuring live music and a free screening of the 1985 hit movie, Back to the Future. The celebration continued over the weekend with family friendly activities and movies.

The opening of the Twilight Theatre in 1917 marked a new era of entertainment in America. It featured modern opera chairs, beautifully painted Art Deco styling throughout, and a soaring, 24-foot ceiling. It was soon offering programming that included silent films, vaudeville, musical performances, and rallies for war bonds. The entire building was destroyed in the EF-5 tornado in 2007 that also leveled 95 percent of the town and badly damaged the remaining structures. Against all odds, the town rebuilt again to become America’s leading community in LEED-Certified buildings, with wind turbine energy supplying much of its power.

The new, ultra-modern Twilight Theatre, in partnership with the Kiowa County School, will show first run movies, serve as the school’s auditorium, be a community meeting space, and host theatre, dance and other community functions. It includes an improved sound system featuring Dolby Surround 7.1, and other modern amenities.

“When we approached Christie, they immediately offered to donate one of their top-of-the-line digital cinema projectors. We were absolutely thrilled by their generosity,” said Wagner. “Christie’s digital cinema projector is truly the theatre’s crowning jewel, providing us with a state-of-the-art auditorium on par with the best, most modern facilities in the world. We are very appreciative for the consideration of great companies such as Christie.”

“Christie’s projector was installed by Cinema Equipment & Supplies, which also donated its services, and for this I know that we, Adam, and the community, are very appreciative,” said Scott McCallum, Christie’s Midwest-based entertainment solutions manager.

“Giving back to the community is an integral part of our corporate culture and something we strive to accomplish every day,” said Kathryn Cress, vice president, global and corporate marketing, Christie. “We didn’t hesitate to contribute to the town’s amazing success story. They literally came back from the rubble, becoming the ultimate example of what people can accomplish when they work together for a common cause. We are proud to know that our digital cinema projector will be providing many years of exceptional entertainment to the people of this amazing community.”