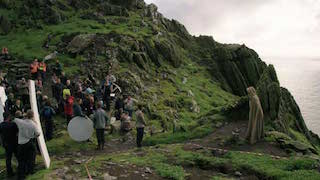 In advance of the December 15 release of Disney’s Star Wars: The Last Jedi, National CineMedia is now presenting an exclusive behind-the-scenes look at the making of the movie as part of its revamped preshow Noovie. The content is part of NCM’s Noovie Backlot series. For Steve Ochs, NCM’s senior vice president, marketing and creative, this is all part of his overall effort to re-imagine the preshow experience.

As the company announced earlier this year, Noovie replaced NCM’s FirstLook pre-show on more than 20,600 screens in 1,700 movie theaters throughout the U.S including AMC, Cinemark, Regal Entertainment Group, and 49 other regional and local theater chains. Entertaining content is a core element of Noovie, and NCM will continue programming more exclusive content in the preshow to give audiences an insider look at movies, music, local events and more.

When Ochs was challenged with improving the FirstLook preshow he said his first move was to understand what moviegoers liked and didn’t like about it. His research led to the creation of NCM’s Behind The Screens moviegoer panel. The group has five thousand members and, Ochs said, he and his team converse with them online at least once a week and often more. 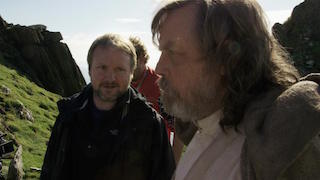 Ochs said the panel was developed over the last eighteen months to two years. He described the panel as avid moviegoers, but wouldn’t describe them in any more detail. He said the target of all his research is to better understand what appeals to Millennials and Generation Y.

Recently NCM has been using the group as a focus group for content, both Noovie’s and content from the major movie studios.

Disney signed on as the premiere studio for new Noovie Backlot segments through June 2018, and will offer a unique behind-the-scenes look at several upcoming films from Disney, Pixar, Marvel Studios and Lucasfilm including Black Panther, A Wrinkle in Time, Avengers: Infinity War, Solo: A Star Wars Story, and The Incredibles 2. 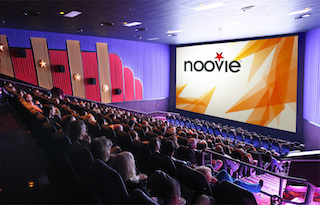 “We’re excited to expand our relationship with NCM,” said David Sieden, vice president, cinema partnerships for the Walt Disney Studios. “There is no better showcase for our studio content than the big screen, and Noovie Backlot is a fresh way to give fans a fun and exclusive look at our slate of upcoming films.”

As it continues to evolve, Noovie will feature games including Name That Movie trivia and Fantasy Movie League, an experience that combines the competition of fantasy sports with the popular world of entertainment and movies. NCM’s new Noovie pre-show will also continue to showcase entertainment content from ABC Networks, Amazon, Disney, Google, Hulu, Nintendo, NBC, Toyota, Turner Broadcasting System, and more, along with national, regional and local advertising. Ochs said their research has shown that younger people enjoy learning about new television series because so many of them no longer have access to cable TV. Ochs called them "the cord cutters."

Ochs said the overall goal is to make the moviegoing experience better. He wants to see more original Noovie content in the preshow, specifically movie-related segments that connect directly with the audience and, in turn, leads them to dedicated content online.

To that end, he said, “As we move forward we’ll begin developing our own content and transform ourselves into a digital media company. Our ultimate goal is to ‘super-serve’ the avid moviegoer; the casual moviegoer will follow.”