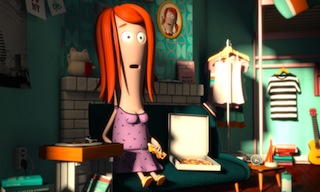 The Dutch film A Single Life is an Academy Award nominee in the Animated Short Film category. Created by Job, Joris & Marieke, a Netherlands-based creative studio, A Single Life relied extensively on Maxon’s Cinema 4D as its central application to handle the complexities of 3D content creation including modeling, rigging, character animation, lighting, rendering and more.

A Single Life is a 2:15-minute animated short film that tells the story of Pia, a young woman who finds a mysterious vinyl single. As she spins the record she is suddenly able to travel back and forth through the years of her life. The three-person filmmaking team comprised of Job Roggeveen, Joris Oprins and Marieke Blaauw handled all aspects of A Single Life including original idea, writing, directing, designing, animating, as well as creating the sound effects and composing the music. The film was originally created as a part of Ultrakort, a special project of the Dutch Film Fund and the Pathe cinema group where select short animations are screened in front of blockbuster movies. In the Netherlands, nearly a million people have viewed the film.

Job, Joris & Marieke, established in 2007 initially as 2D and stop motion studio to create short films, videos and commissioned work, gradually began to push its artistic capabilities into the 3D animation realm to handle projects with rich layers of detail.

“One of our main story telling challenges in A Single Life was to handle numerous assets in order to capture Pia throughout the five stages of her life – from a little girl to old age – in five different settings within a very abbreviated timeframe,” says Oprins, one of the film’s directors. “Cinema 4D is user-friendly, integrates well with other professional applications and delivered us the creative advantage we needed to work quickly and translate our ideas onto the screen perfectly.”

“We congratulate Job, Joris & Marieke on being recognized with the prestigious Oscar nomination,” said Harald Egel, managing partner of Maxon Computer GmbH. “A Single Life is a great example of how our 3D solutions in the hands of a small team of creative professionals can inspire work of the highest caliber and entertain audiences the world over.”

“We are thrilled to receive an Academy Award nomination for A Single Life and eager for our journey to Los Angeles to attend the ceremony,” adds Oprins.