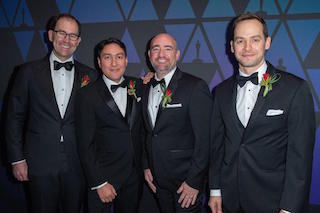 On Saturday night at its annual Scientific and Technical Awards Presentation, the Academy of Motion Picture Arts and Sciences honored PIX with a Technical Achievement Award. The award recognized Eric Dachs, founder and CEO; Erik Bielefeldt, director of research and development; Craig Wood, technical director; and Paul McReynolds for the design and development of the industry leading security mechanism for distributing media. Prior to the awards ceremony, Digital Cinema Report spoke exclusively with Bielefeldt and Wood to talk about the company’s continued innovation in the evolving world of content collaboration from film to digital to next-generation data rich requirements.

Craig Wood: PIX is the premier collaboration and asset management platform focused on the entertainment industry. PIX stands for Production Information eXchange, however our clients think of PIX in more simple and human terms: the go to place to securely and efficiently work with their distributed, multidisciplinary teams. PIX is uniquely positioned at the intersection of technology and entertainment. We specialize in providing tools, personalized service and flexible workflows to meet the diverse needs of our clients and their projects.

DCR: What products and services does PIX offer and how do they improve the motion picture production process?

Erik Bielefeldt: PIX System is an online collaboration platform for film and television production. We provide secure access to production content around the world on a range of different devices. This could be a location scout uploading photos for review by the director, to producers reviewing dailies, to talk show hosts reviewing screeners and everything in between. We facilitate all phases of production, and our users can review material on the web, their mobile devices, laptops, or their TVs.  These users can be anywhere on the globe, reviewing from their offices, at home, even in transit on a plane with our offline access.

The product that our customers are most familiar with is PIX for Desktop, which is currently getting some major upgrades. Many of our users also access PIX on iOS, and just recently we’ve released PIX for Apple TV, which has been very popular. We of course have PIX for Web as well, plus a number of R&D initiatives, which will bring some really cool products out in the next year or so.

But aside from a list of apps and features, two core things that PIX also provides are service and security, and these are mission critical in our industry. Each customer and production have a special set of requirements, and we pride ourselves in working closely as partners with them to make sure PIX works for what they need done. When you call PIX support, you get an actual person, and not just someone at a call center--you talk to someone with industry experience who can help you solve whatever problems you’re facing.

In regard to security, our whole platform was built with security in mind.  Regardless of the features you have, if they are not secure, it is a non-starter in this industry. We are constantly reviewing our infrastructure and applications both internally, and with the help of 3rd parties, to make sure we have the highest standards in place. This also includes working closely with our customers’ IT teams to make sure we are meeting their requirements as well. The Technical Achievement Award that we are receiving from The Academy is for our secure distribution system, so I think our track record on security speaks for itself.

DCR: Which major studios, post professionals and directors have used PIX technology? How have they implemented it?

CW: PIX’s secure and robust approach to collaboration has been widely adopted and is the best way to work. “PIX it to me” has become common vernacular used throughout industry and among Hollywood elite. Major studios including Paramount Pictures, Sony Pictures, Universal Pictures, Walt Disney Studios, Warner Bros. Pictures and streaming service providers Amazon and Netflix, among others, rely on PIX daily. Used on over 5,000 movies and television productions and over 3.6 Billion feet of film, PIX has helped directors, including David Fincher and Sam Mendes, bring their creative visions to life.

EB: PIX was initially developed for the film industry, with the needs of the industry in mind. Our founder and CEO, Eric Dachs, realized there was a need to improve collaboration techniques with his experience as a sound designer and editor in post-production. With input from director David Fincher, and other leading industry professionals, the initial PIX product was conceptualized and used during the making of Panic Room in 2001. PIX was officially introduced to the market in 2003. We were the first to offer a solution that connected studios and productions to allow secure digital sharing and collaboration. Over the last 16 years we have continued to innovate and improve upon that initial product.

DCR: How has PIX technology and its solutions evolved through the changing mediums from film to digital production?

EB: PIX has always been a proponent of digital solutions from the beginning. Obviously, PIX has and continues to be used with film based workflows, but our product focuses on the distribution of digital content. We were one of the early companies doing distribution of digital dailies starting in 2004, and as the majority of workflows have switched to purely digital over the years, that has only benefited us. We’ve been able to do integrations with DIT carts and camera vendors to automate distribution of media and metadata, and we expect this to be an important area where we can continue to innovate. The full benefits of digital production have yet to be realized, and I think the next few years are going to be very exciting for our industry.

DCR: Why is it important to have a company like PIX as the backbone for secure content collaboration solutions?

CW: In the fast-paced world of content production and distribution it’s important to provide a secure solution that can help carry projects from script to screen. But in addition to technology and systems, PIX represents trust and understanding. Every day, tens of thousands of new elements and conversations on everything from script pages and location photographs to camera originals, dailies, cuts and soundtracks traverse our system. For many of our key clients, PIX has become the backbone of their shows.  With our flexible system architecture, PIX has evolved to keep pace with a rapidly changing industry. All of our technological and workflow advancements are backed by our industry leading support that stays ahead of client needs. With PIX you know your content is private and secure, with industry natives ready to assist you who understand, and have personally experienced, the challenges you face. Our specialized teams partner with you to optimize process, letting you focus on the job at hand.

DCR: What does the entertainment industry need to be aware of or look ahead towards in enabling secure content collaboration tech?

EB: As the size of content grows, with 4K and HDR, we’ll need to make sure the ability to transfer that content efficiently keeps pace.  This means faster connections and technologies like 5G will be crucial for delivery. In addition to just moving content around though, metadata and other information like script supervisor and director’s notes need to be distributed as well.

And with the proliferation of more and more data, the need for simultaneous distribution in multiple regions, and the speed with which everything moves these days, efficiency and automation are going to be key in the next few years. When I say efficiency and automation, people might think of robots doing their jobs for them, but that’s not the case. The efficiencies that I’m talking about will allow people to spend more time on creative work, and less time fighting with technology that gets in the way of the filmmaking process.

DCR: What does being honored by The Academy with a Technical Achievement award mean to PIX?

CW: It is an amazing honor and privilege to be recognized by The Academy for our work and contributions to the industry. As an original engineer at PIX, I’ve seen the growing impact we have had on the industry and the ways our service aids professionals, from all walks of life and in all positions, to execute their vision. I’ve loved contributing to their successes and am humbled to have played a supportive role. I am deeply appreciative for this recognition and share these accolades with everyone at PIX.

EB: It goes without saying that it is truly an honor to be awarded by the Academy. I joined PIX back in 2004 after answering a Craigslist ad, and at the time, I never even dreamed that we would be where we are now, not only as a business, but also having such an impact on the industry to be recognized in this fashion. I’m truly grateful to everyone at PIX, as well as our loyal customers and the Academy, who have helped to make this possible.

In the photo from left to right: Eric Dachs, founder and CEO; Erik Bielefeldt, director of research and development; Craig Wood, technical director; and Paul McReynolds attend the AMPAS Sci-Tech Awards where the PIX System and development team received a Technical Achievement Award from The Academy. (Photo courtesy AMPAS)