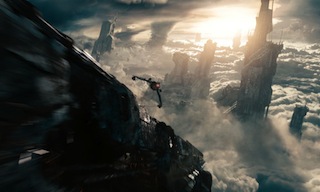 Recognized with an Academy Award for Hugo and an Emmy Award for the second season of Game of Thrones, visual effects house Pixomondo recently created nearly 300 shots for J.J. Abrams' epic Star Trek Into Darkness. Their work represented approximately one third of the films visual effects.

As with most of the companys larger projects, shots were distributed throughout Pixomondos worldwide studios based on available bandwidth and individual strengths, with the Los Angeles office serving as the lead.

Ben Grossmann was Pixomondos overall VFX supervisor on the project, with Enrico Damm managing the 25 CG artists in Los Angeles responsible for one of the most action-packed sequences of the film. In the 15-minute scene, an alien planet slowly comes into view as seen from an aircraft. The vehicle then descends through the clouds and is forced to land. With about 80 VFX shots, the sequence is almost entirely CG  the only practical footage was taken of the crewmembers in the cockpit. Dealing with quick cuts, a lot of overall shots and massive scale, the CG team tapped Nvidias Quadro K4000 GPU to accelerate their Autodesk 3ds Max workflow.

Director J.J. Abrams wanted flexibility in final camera paths and angles, so Pixomondo had to build incredible depth into the entirely computer-generated alien city. Each scene was bursting with detail  3D images with 130 million active polygons and up to 32GB of textures  to allow Abrams the greatest amount of freedom in camera movement. The immense of amount of required data strained Pixomondos workstations, hampering performance and frustrating artists. 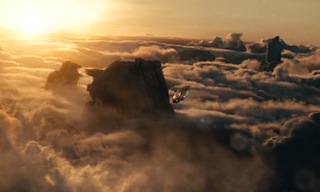 When using Autodesk 3ds Max 3D modeling, animation and rendering software, artists encountered response times of more than an hour in some of these massive scenes, often freezing a system outright on their artist workstations running older model, low-powered GPUs. With The Foundrys Mari 3D digital paint tool, artists faced verification times of a minute or more with some scenes that had over 200 8K and 16K textures, to make sure painted elements were baked properly into the UV, which meant they were waiting almost twice as long as they were working and were unable to take advantage of Maris interactive workflow.

We pushed a lot of limits when it came to scene scale, Damm explained. It became impossible to navigate in these massive 3D scenes, and other programs started running slow. Assets had a lot of textures and large texture sizes weve never encountered. All this data required way more power to process than was available on our workstations.

At the beginning of February 2013, Damm and his team got nine Nvidia Quadro K4000 cards, built on Nvidia s latest and fastest Kepler GPU architecture, which they installed on Dell workstations equipped with HP X5000 storage servers. The K4000 cards were used most heavily for lighting and scene assembly, which was all done in 3ds Max. A significant speedup when accessing assets was the first thing he noticed after adding the K4000s.

We were very impressed with how the K4000 cards impacted 3ds Max viewport performance, noted Damm. Once we discovered how much faster and smoother data was processed, we relied heavily on the K4000-accelerated workstations and practically had them running 24/7. When one artist would leave for the day, another artist would take over on that same system. 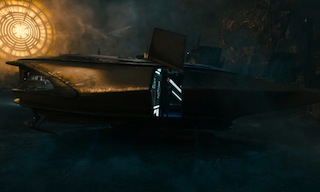 Prior to adding the Quadro K4000 cards, just getting the 3ds Max viewport to open either took a long time or was altogether impossible with some of their largest scene files. With Quadro Kepler, the artists could process assets much faster and accomplish more work in a day. They could also turn on shadows in the viewport and move light sources around with real time feedback. Asset creation could be completed at a higher level of quality with less wait time and artists had more interactivity in the viewport even when working in heavy scenes. Additionally, the artists were able to work in large models without turning off detail like textures and shadows, retaining more accurate previews of how a scene was taking shape ultimately resulting in a faster path to fulfilling the directors vision for the shot.

With Quadro K4000-accelerated workstations, Pixomondo artists were able to accomplish more each day with reduced wait times and overall frustration, whereas before, making even the smallest tweaks to scenes had been a substantial undertaking. Because the scenes were so data-heavy, they had to be split into separate files to edit the various elements. If there was a lighting change, artists would have to alter the foreground first and then repeat the changes separately to the background, doubling the amount of effort and time needed to make edits. Damm tried to minimize render times by dialing back some of the detail but that often created continuity issues.

Splitting the large scenes helps with the data volume issue but then artists have to compare renders to make sure any changes were executed across the scenes. If anything was forgotten, theyd have to go back and re-render so it wasnt the most ideal solution, explained Damm.

A faster workstation meant happier and more productive artists, and eliminated the need to split large scene files. Working with Quadro cards also helped mitigate machines freezing, forcing artists to idly wait around for the viewport to come back.

Before we got these cards, I would run to the producer and scream for better machines, Damm concluded. It turns out our machines just needed a K4000 boost. I would even love to have more of these cards.