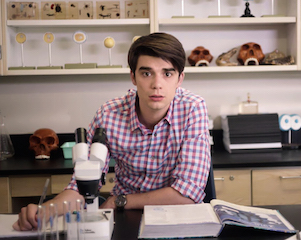 “I think if you’re making a high school movie, you can’t not watch John Hughes movies for reference,” said cinematographer Hillary Spera (Duck Butter, Submission). “Even if it’s subliminal, they’re woven into the language.” Filmmaker John Hughes had a string of hit films in the 1980s that were a true depiction of high school life in middle class suburbia. Movies like 16 Candles, The Breakfast Club, and Pretty in Pink portrayed teen characters with depth and intelligence but were also comedic.

In that spirit, Alex Strangelove is a high school romance film that Spera shot for director Craig Johnson (Wilson, The Skeleton Twins). The Netflix feature film tells the story of Alex Truelove (Daniel Doheny), a well-rounded high school student who plans to lose his virginity to his girlfriend Clare (Madeline Weinstein) during his senior year. Complications occur when he meets Elliot (Antonio Marziale), who makes him question his sexual identity.

Spera grew up in Vermont and went to college at Boston University where she studied basic film production and film theory “I never went to grad school for cinematography,” said Spera. “I had a passion for still photography and while at college, worked at a rental house called Boston Camera. That developed into discovering that I really loved being around cameras, which lent itself to being on set and working my way through multiple adventures.” Instead of moving up the camera or lighting ranks, Spera went to shoot anything she could as a DP, including documentaries, commercials, and indie films.

Her involvement with Alex Strangelove came when producer Jared Goldman, (whom she worked with on Richard Levine’s Submission) introduced her to director Johnson at Sundance in 2016. “I had been a fan of Craig’s work and this was a truly unique and awesome script,” said Spera. “It was incredibly funny, had so much heart, and I loved how real the characters felt, in addition to the use of magical realism to show Alex’s rich and complex inner world, and his relationship to the outside world as he discovers himself. One of the challenges that Craig and I talked about was trying to maintain naturalism while showing the surreal moments when Alex is realizing who he is. How bizarre and wonderful high school first love can be. The excitement, the heartbreak, the mistakes – all of it. We set out to show that in a way that unique but not over the top and specific to him and his view of the world, while maintaining a story that felt tangible, relatable, and grounded.”

With Netflix’s 4K mandate, Spera tested out the Panasonic VariCam and was immediately impressed by its colorimetry. “It seemed very natural in the way it rendered natural light and skin tones and felt familiar to the way I have worked in the past,” she said. “I really wanted a look I could rely on and push comfortably, even though I had never shot with the camera before. I felt confident that it would be a great match.” 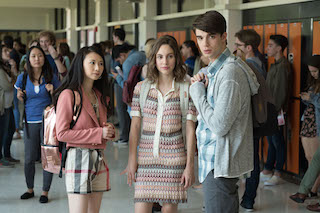 According to Spera, John Hughes 1986 film, Pretty in Pink, was a big influence on the tone of Alex Strangelove. “We called it Pretty in Pink meets Superbad. [Alexander Payne’s 1999 film] Election was also a reference with its use of primary colors and the way it was subjectively lensed,” she said. “And [Mike Nichol’s 1967 film] The Graduate is always a reference for me. The use of composition to show relationships between characters within the frame and how it often relates to the main character’s inner world was very similar to our movie. He is in a place of transition, both in his life and his identity. Films of the 1970s are always a reference for me, so that always sneaks in there as well.

“There’s a prom scene towards the end of the film that is quintessentially ‘80s,” continued Spera, “We wanted to reference classic high school movies. There is a lot of intentional nostalgia in the look of this film, which I think allows the story to feel both modern and relatively timeless.”

Alex Strangelove was shot with two VariCam Pure cameras. Spera captured 4K (4096 x 2160) VRAW files in 23.98-fps. During testing, Spera worked with her colorist, Alex Bickel, with both VRAW and AVC-Intra files and they decided that VRAW gave them more color information to work with, which was important to the look of the film. They also felt the VRAW files gave them extra dynamic range. “We also had some visual effects, so it was a good choice,” said Spera. “I would do the same set-up when I shoot with the VariCam again.”

Spera revealed that she stayed at 800 ISO the entire shoot since she was never truly shooting in low light situations. “I will say we stole some stuff on the street in Brooklyn that we didn’t have time to light and the 800 was still great,” she saod. “I knew the option to go to 5000 was there but I wanted to keep it at the lower ISO and it was beautiful.” 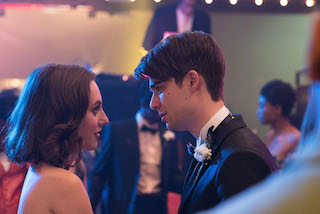 Because she was trying to reference older films, Spera used vintage Cooke Speed Panchro lenses (rehoused by TLS) because she loves how digital highlights roll off with older glass. “It was a nice choice for this film, it took the digital edge off without the use of much diffusion,” she explained. “In general, the vintage glass helps the image have a more textured and softer quality. It doesn’t have that ultra-crisp sharpness of modern glass. They also have a great flare and I am able to play with the quality of the glass. We wanted it to look a little more natural, relatable, and human. It’s all about the glass.”

Since she was shooting at 800 ISO, Spera primarily used HMIs to replicate natural daylight, as well as LEDs for their speed. “Our gaffer, Gavin Curran, introduced me to Quasars a few years ago,” said Spera. “Almost every party scene in the movie has Quasars with colors on them. We were able to use them as a pop of color in a very manageable way.”

Unlike a lot of indie films, Spera did not implement handheld movement and shot primarily on two dollies for A and B cameras and then Steadicam when moving around with the main character. She said one of the hardest scenes to shoot was the prom, which she had only one day to shoot a lot of pages, mostly on Steadicam, operated by Steadicam operator Yousheng Tang. Since the camera had to move 360-degrees, Spera took all her movie lights off the floor and incorporated practical sources that would be typically used at a dance – from strobe lights to disco lights to lighting effects to haze.

Technicolor-PostWorks NY handled post for Alex Strangelove, which was graded by Bickel. According to Spera, the grade was fairly simple and the look didn’t change drastically from their dailies. “I’m a big proponent of baking in certain looks in camera,” she said. “If possible, I’m always trying to make the negative as close the ultimate direction we are going. The scenes that Alex and I worked the hardest on were those that involved the use of a lot of color and matching between the cameras, especially with the vintage glass. Alex was able to really heighten the look of the film and we embraced making it feel more colorful and open. The format really allowed us to have flexibility in the color space.”

“There’s something that’s very finely tuned and cinematic about the VariCam,” says Spera. “It has a distinctive look that’s not necessarily that of an Alexa or Red, but more of its own thing and I think it worked well for the look of this movie.”