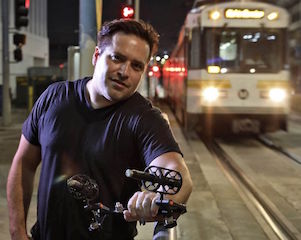 As a Foley mixer, Geordy Sincavage has worked on a variety of films and television series throughout his career, including The Revenant, and HBO original series' The Leftovers and Westworld. Sincavage is the owner of Sinc Sound, a sound effects company that records ambient sound for productions, without using an audio library.

Recorded inside a room filled with props like mud pits, car doors, glasses and anything else that can be used to create the native sound of an object, productions rely on Sincavage to capture unaltered, realistic audio. In turn, Sincavage relies on DPA Microphones’ d:dicate 4006A omnidirectional microphones to capture the audio he needs.

"I started using DPA microphones around two years ago when recording for The Revenant," says Sincavage. "I wanted to do stereo room micing on a separate track in Pro Tools and to do that I needed two separate microphones. I reached out to Chris Spahr, VP of sales and marketing, USA, at DPA because I needed the cleanest microphones that would give me the truest sound.”

“So many microphones color sound and DPA mics have the flattest sound with no noise floor. The resulting audio was clear and concise, which is hard to find when you are trying to replicate the sound that you are hearing in real life through a microphone."

For The Revenant, Sincavage used DPA d:dicate 4006A's to capture an array of sounds, including boots walking over wooden planks, oars splashing in the water and snow crunching under feet. The sounds Sincavage and his team created helped earn the film its 12 Academy Awards nominations, including recognition for outstanding sound editing and sound mixing.