Rising to the Dark Challenge of Lighting a Horror Film 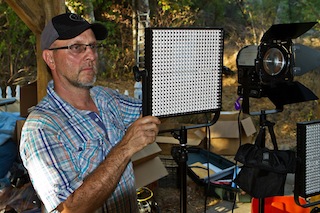 Horror films have a certain style: cramped quarters, heat, now-you-see-it-now-you-don’t or did-you-really-see-it. Lighting for the suspense, and horror of the genre is always a particular challenge but one that cinematographer Steve Romano believes he handled nicely the indie feature The Girl, which was directed by Jennifer Blanc-Biehn.

“We were shooting with the Sony F65 in and around Topanga Canyon, in the Santa Monica, California mountains,” he explains. “The difference in the latitude of the camera (shades of grey between black and white about 13.5 stops) and the color gamut which exceeds that of film was why we chose this camera. The camera shoots 8K, giving you the ability to pan and scan, as well as punch in to a tighter shot in post. All those factors enable you to shoot with more natural and practical lighting scenarios. But, I still find I do need to supplement with some other light source, and this is way I like using the Litepanels.”

“Add to that heat, close quarters, everything you expect for the genre and time of year. The low profile, portability, low power consumption and no extra heat from Litepanels LEDs was a big deal,” Romano used two 1x1 Bi-Colors, four Sola 4s, a Sola 6 and a Sola ENG, which he says are his favorite.

“The Sola 4 and 6 were like using a traditional Fresnel, with floor and spot options,” he says. “The Bi-Colors were nice to dial in the color temp for some of the mixed light scenes. And, not having to get gels to adapt is a great time saver. Sola ENG is my favorite because you can just run it off a battery and stick it anywhere. All the lamps have dimmers, so it makes balancing intensity of the lights easy. And, the ability to plug them in anywhere with no heat – made them extremely friendly for this shoot.”

Romano had a challenging shot in the trunk of a car. He was positioned in the back seat/trunk with the camera while the girl (Evie Louise Thompson) was shoved into the trunk and then the lid was closed. “The Sola ENG with a battery was perfect, as I placed it on a gorilla pod and then could put it anywhere within the trunk,” Romano explains. “I needed to light the actor’s face (Michael Biehn) when he places the girl into that trunk. When he bent down his face would go dark. So, I used the diffusion from the gel set and dimmed it just the right amount, which made it a quick and easy way of balancing the natural light with the face going dark. Even when the trunk closed it gave enough light to see the actress and the texture of the inside of the trunk’s lid.”

Another shot inside a child’s bedroom was easy, thanks to Litepanels. “This is where the child (Tristan DeVan) sees his angry father (Biehn) boarding up the window,” Romano explains. “It was handheld over the boy’s shoulder and then back onto the bed. I lit the room by bouncing a 1x1 Bi-Color and gave it a bit of a warmer tone. Then I used the ENG to light the father’s face as he went dark when he looked into the window. All this was done on batteries, because the room had sketchy power. It was just easier to work without cables all over the place.”

New York-based Romano specializes in high-speed work on commercials, documentaries and music videos. The Girl, which stars Michael Biehn and Tia Carrere, is his second pairing with actress/producer/director Jennifer Blanc-Biehn. The movie is in post now and was recently presented at the American Film Market.