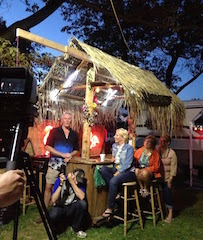 Directed by Bryce Wagoner, Parrott Heads casts an affectionate eye on the passionate subculture that has grown up around Buffett and his signature blend of breezy, good-time music known as “trop rock.” It focuses in particular on Scott Nickerson, a fan of Buffett since the 1980s and founder of a worldwide organization known as Parrot Heads in Paradise. Its members not only attend concerts dressed in outlandish Caribbean-themed attire but have created a unique sense of community and carry out on a range of philanthropic activities.

Production spanned two years and more than 30 cities across the United States and as far away as Paris. The finished documentary mixes concert footage, interviews, behind-the-scenes material, and story segments about Parrot Head goodwill efforts. “The Parrot Heads came together through their love of music, but they are more than a group of fans,” says Crystal Angel, one of the film’s executive producers. She points to a section of the film where the group comes to the aid of a member after she suffers a life-threatening accident. “They’ve done a lot of good and helped a lot of people,” she notes. “It’s what they call ‘party with a purpose.’”

Such thoughtful moments provide a counterpoint to the Parrot Heads’ favorite activity: partying to Buffett’s music. “Jimmy’s annual concert in Paris draws fans from around the globe,” says Angel. “They build a Pirate Island in the median of one of the city’s main streets—filled with men in coconut bras.” Roundabout Entertainment founder and CEO Craig Clark is also among the executive producers of the film. 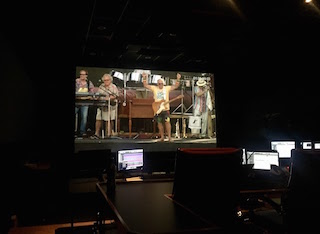 The project began as a labor of love by Wagoner and its story crystalized as it moved from production to post. “Bryce and his crew traveled the country, following Jimmy on tour and shooting Parrot Head events,” recalls Kathryn Robson, the film’s editor. “As we started to cut it, he had a loose idea of the story and it soon became clear that Scott Nickerson would be the focal point. That gave us a strong framework and allowed us to build a narrative taking in the history and the charity work, as well as the whackier things.”

Roundabout re-recording mixer Teddy Salas mixed the final soundtrack which included material from virtually every imaginable source ranging from festival style concerts to fan videos from the 1980s. A lot of the interview segments were shot run-and-gun style outside concert venues or in other informal settings under wildly divergent recording conditions. “The live concert and party scenes were especially challenging as we were trying to dig out individual lines of dialogues from background noise,” Salas recalls.

The aim was to retain the atmosphere and spontaneity of events happening on the screen. “The film not only includes Jimmy’s music but also music from bands that he inspired,” Salas notes. “Working on those scenes was a lot of fun, but it often meant we were dealing with music that was recorded in a bar through a single mic. We had to do a lot of clean up to make it play well and keep the energy of the live performance.”

Colorist Michael Smollin faced similar issues in bringing consistency to the diverse production material. Smollin, whose documentary experience includes 2012 Oscar winner Undefeated, says that his objective was to subtly smooth out differences in format to avoid distracting the audience. “You want to keep people focused on the story,” he says. “My approach was to do a first pass to even everything out and make it all look great, and then go back and work on the nuances.”

In one of his final touches, Smollin created distinct looks for individual interview subjects as a way of anchoring them in the minds of the audience. “Everybody has a certain look,” he explains. “For example, one woman appears in a nighttime exterior outside her home. We neutralized the color to give it more of an evening look and added a character vignette to make her standout from the background.”

The documentary climaxes with an outdoor concert where Nickerson is given an opportunity to play drums with Buffett’s band. It’s a quintessential moment that captures the exuberance and likeability of Buffett and his fans, and the mutual love affair that’s been going on for 40 years. “Jimmy’s music has a wonderful, feel-good vibe; it takes you to the beach…with a buzz,” says Angel. “And the Parrot Heads are very cool and chill. They’re the greatest.”