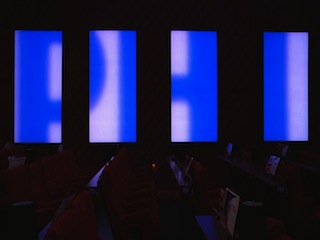 Royal Philips demoed LightVibes at today’s Event Cinema Association Conference 2014 at the Genesis Cinema in East London. Philips is also the lead Platinum Sponsor at the conference.
Philips initially announced the development of LightVibes at the CinemaCon trade show in Las Vegas in March earlier this year.

The exit polls from the demos at CineEurope have unanimously illustrated that LightVibes enhances the event cinema experience:

Of particular importance to marketers, 72 percent said that LightVibes improves the advertising experience

“The feedback from exit polls at CineEurope highlighted just how much potential LightVibes has for cinema goers, cinema exhibitors and marketers. We are excited to demonstrate the capabilities of LightVibes in London and, in the process, convey how the system can open new revenue streams in the event content industry,” said Ronald Maandonks, business development director, at Philips Lighting.

Maandonks also took part in a panel discussion at the conference on the theme of New Business Models and New Technology.

Creating engaging entertainment experiences will enable cinema exhibitors to reach broader audiences and Philips LightVibes helps them enhance, differentiate and repurpose their cinema spaces. This will help them to access new revenue streams and make better use of their assets, for example the ability to tap into the projected $1 billion by 2018 market [1] for event cinema. The solution enables this by creating life-like in-hall experiences for viewers of event cinema - from live operas to rock concerts and sporting fixtures.

Philips confirmed that the first LightVibes enhanced shows, in which paying customers will be able to attend, will take place before the end of 2014 in London.

Founder and chair of the ECA, Melissa Keeping said, “Technology such as LightVibes has the potential to truly change the event cinema landscape for both audiences and exhibitors alike. We are delighted to welcome Philips to the ECA Conference 2014 as our lead Platinum Sponsor partner.”