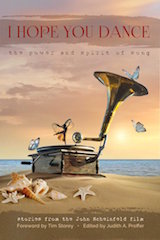 Screenvision Media and KAOS Connect have announced the launch of their first joint event cinema program – the empowering theatrical documentary produced by Meteor 17 CEO, Spencer Proffer, I Hope You Dance, The Power & Spirit of Song. The documentary film features stories of faith, inspiration and overcoming unimaginable odds as told through the transformative power of song.

“We are strong believers in the power of event cinema and are excited to work with KAOS Connect and Meteor 17 on our first initiative as we re-enter the space,” said Darryl Schaffer, executive vice president, operations and exhibitor relations, Screenvision Media. “I Hope You Dance, The Power & Spirit of Song, is an inspiring program backed by unprecedented marketing support, and we’re looking forward to engaging audiences with content they’re passionate about in a brand new way.”

Directed by award-winning writer/director John Scheinfeld and produced by Proffer, the documentary I Hope You Dance, The Power & Spirit of Song is based on the Grammy award-winning song and features popular music icons Graham Nash, Vince Gill and Brian Wilson; the late Dr. Maya Angelou, legendary author; and America’s popular and influential speaker/author, Joel Osteen, among others. The program will take audiences on a journey through the exploration of how one simple song has greatly impacted many lives through hope and healing, inspiring transformation.

“I Hope You Dance provides the opportunity for people of all backgrounds and ages to gather together as communities in theatres and experience ways to overcome life’s biggest challenges through the power of hope, inspiration and song,” said Dan Diamond, KAOS Connect managing partner.

I Hope You Dance is the crossover country pop song written by Mark D. Sanders and Tia Sillers that quickly became a Billboard chart topper for country singer Lee Ann Womack with Sons of the Desert when released in 2000.

I Hope You Dance garnered the 2001 CMA, ACM, NSAI, ASCAP and BMI awards for Song of the Year, followed by the Grammy Award for Best Country Song.  As of February 2016, the song has sold more than two million digital copies in the U.S. alone.

“The potential of music to rouse hope, spark inspiration and excavate stories that stir hearts has been at the core of my entire career,” said Spencer Proffer, Meteor 17 CEO and producer. “I'm pleased to team with close friends Dan and Shelly at KAOS Connect, my business partners in the faith and inspirational media lane, Joe Battaglia and David Sams, and our new colleagues at Screenvision Media to bring a film based upon the poignancy of Mark D. Sanders and Tia Siller’s timeless song to the public."

I Hope You Dance, The Power & Spirit of Song, is approximately 95 minutes in length and is not yet rated. For more information and to purchase tickets, visit www.ihopeyoudancetickets.com.