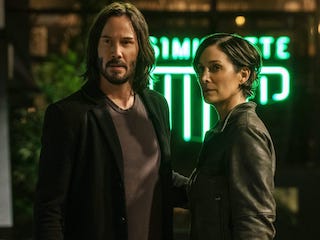 In the two decades since we first entered The Matrix, there’s been a quantum leap in computing and filmmaking technology. Visionary filmmaker Lana Wachowski made sure she considered both those changes before going back down the rabbit hole. “There have been huge advances in computing that called for an updated visual representation of the virtual world of The Matrix,” explains Daniele Massaccesi, co-cinematographer with John Toll, ASC on The Matrix Resurrections. “Lana wanted to create a synthetic world that would be believable to humans in 2021. It is therefore photoreal and full of color.”

The Matrix Resurrections is the long-awaited next chapter in the sci-fi franchise that began in 1999 with one red pill and has populated cultural consciousness ever since. Wachowski directs from a screenplay written by Wachowski, David Mitchell & Aleksander Hemon, based on characters created by The Wachowskis. Keanu Reeves and Carrie-Anne Moss reprise their roles as Neo and Trinity.

The original film was shot with a green filter, a tonal key borrowed from the green code typical of industrial computer monitors of the time. It was also shot, like its two sequels, on film. For The Matrix Resurrections, Wachowski wanted to take advantage of the versatility of digital.

“We knew we had to cater for significant VFX, but Lana also wanted to shoot as much in camera as she could,” says Massaccesi. “In addition, she has evolved the way she shoots movies and prefers to use Steadicam a lot of the time to feel more involved in the creation of the story on set. Pausing to reload film reels would just delay the creative efficiency.”

Massaccesi has operated camera for Toll on Wachowski projects including Cloud Atlas, Jupiter Ascending and Sense8. They collaborated with the director to reimagine the groundbreaking ‘bullet time’ visual effect of The Matrix for Resurrections.

“In prep for Resurrections, we discussed using an array of 100 cameras shooting at 120 frames per second,” Massaccesi says. “In tests we found Red’s Ranger Helium was the best at capturing high frame rates. Camera reliability was another important consideration, plus we were going to need dozens of camera bodies making Red the perfect camera choice.” 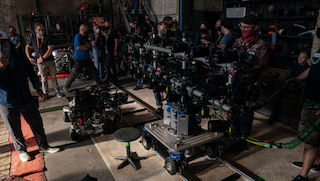 As production developed, the initial plans for volumetric capture were altered in favor of different ways to tell the story. Arrays of 15 Red Ranger bodies were deployed for certain shots on set. This included a shot of Trinity screaming, with multiple shadowy perspectives of her face captured by the camera array showing in the same frame.

In the film’s most spectacular homage to the bullet time sequence, two actors [Reeves and Neil Patrick Harris] appear to move at different speeds within the same frame.

Explains Massaccesi, “Lana wanted one actor to be moving super-fast and one moving super slow, and yet be in the frame together interacting. It was our job to try to find a solution for that, and importantly, one that would still enable the scene to be shot as normal without disruption.”

The answer was to use a stereoscopic rig. Instead of having each Ranger in parallax as if to shoot 3D, the cameras were aligned to shoot an identical view, with one recording 6K 120fps and the other 6K 8fps. The footage was then blended in post to create an 11-minute-long scene played back at normal film speed 24fps.

“This is not something we could have practically achieved using a camera array which would demand a couple days work just to set up one shot. The setup also gave the actors greater freedom to move. They weren’t locked onto a green screen unable to perform opposite each other. For Lana, this was all about stepping away from having to postprocess everything and keep as much in camera as possible.”

Similarly, Wachowski tasked her creative team to build interactive lighting fixtures into the film’s production design. One of these illuminated the portals through which characters in the film travel when inside the Matrix. “On set we placed LEDs around the rim of a portal door just so it glowed each time it was activated in the film and a character passed through it. This real-world lighting helps VFX to keep the whole scene feeling real.”

Having finished the major chase scenes and exteriors in San Francisco, the production moved to Babelsberg Studios in Berlin before COVID halted activity in March 2020. By the time resumption was greenlit in August 2020, Toll felt unable to travel to Europe because of the pandemic and recommended to Wachowski that Massaccesi take over the reins.

“I was slightly nervous to be honest,” Massaccesi admits. “When we’d finished in San Francisco, we felt we’d accomplished quite a lot, but we still had three quarters of the movie to shoot.” 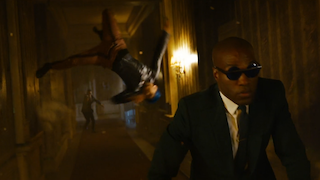 “It’s a process that is not only very efficient, but I think gives Lana a direct and immediate sense of the actor’s performance,” Massaccesi explains. “Being with me on set means she sees and feels what’s going on without any need to pause and look at a monitor. We created a bubble together where all the creative decisions were made. She can immediately tell the actors whether they should change this or that. Although we’ve discussed the scene and I know what to do, she might change her mind and whisper in my ear as we film ‘go right’ or ‘go left’ or ‘look at this’ or ‘point the camera’ there. It’s kind of remote control.”

He adds, “Because Lana wanted to be on Steadicam all the time, that meant we didn’t want to spend much time changing lenses. We relied on Zeiss zooms for most of the film which, combined with shooting at 6K, allowed us to quickly resize the frame if we wanted to without cutting the camera. That’s helpful for the actors too because it meant we could make longer takes.” 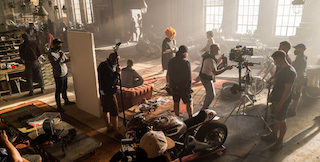 Massaccesi used all his experience to judge the scene’s lighting by eye during the shot and was able to monitor the LUT on a small monitor attached to the Steadicam. In keeping with the original, Toll had set two principal looks for the film to differentiate the human and the synthetic world.

“The Matrix in our film is modern and colorful like a postcard,” says Massaccesi who supervised the DI in Berlin, “while reality is cooler, darker with more contrast. The Red Ranger gives us more information than we need and the freedom to create different looks. For a scene in which Neo confronts Morpheus for karate training, the tone is set according to the warm colors of sunset.”

“We loved the Komodo,” says Massaccesi. “It’s such a small body you can place it anywhere. We used it a lot in vehicles. On a movie like this with lots of fast motion, gunfire, and explosions, you want the action to be as hard and as high resolution as possible. The global shutter eliminates that rubber motion you get from cameras with conventional shutter. It’s a terrific camera.

He continues, “For one scene, set in an office with all the fire alarms activated, we filmed for three days with a full blast of water coming off the buildings and we had no issue with the camera. We never had a problem with cold or heat. In another stunt scene in San Francisco, the camera body of a Komodo melted in a vehicle explosion but we saved the footage. The footage was still saved. It just shows how Red cameras are very strong and reliable.”

The toughest shot for Massaccesi was capturing Reeves and Moss leaping from a building 43 floors up. The actors trained for a month and were safety wired for the jump, which they made in San Francisco.

“The actors are running then jumping and I had the camera leading them in front and then following them down. It’s always a tricky kind of stunt shot. You need to be incredibly careful with the wires and the speed, plus you don’t want to miss it! The first few jumps they were a bit nervous which is quite natural, but they did it, we got it, and it’s a tremendous finale.”