Shooting for the (Very) Small Screen 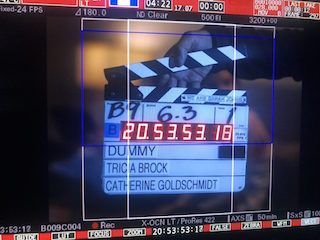 Short-form streaming-video platform Quibi provides premium content specifically designed for consumption on a mobile device. This presented the production of its first scripted show, Dummy, with a unique set of creative and workflow issues. In addition to the standard 16:9 aspect ratio, director of photography Catherine Goldschmidt had to create visuals for a vertically oriented 9:16 presentation.

Working with marketing executive Mike Carter at Panavision, the team at Light Iron, and DIT Peter Brunet, Goldschmidt helped steer the Dummy team toward a new workflow that would satisfy both framing requirements through the entire pipeline, from on-set capture to final color.

Originally developed as a TV pilot, Dummy was rewritten into ten 10-minute segments to fit into the Quibi format. Produced by Deadbeat co-creator Cody Heller and directed by Tricia Brock, the series is a buddy comedy about an aspiring writer (Anna Kendrick) and her boyfriend’s sex doll.

“From my perspective, it was like we were shooting an indie feature,” Goldschmidt explains. “The script totaled around 100 pages broken into 10 episodes to be shot over 18 days on practical locations across L.A.”

Quibi’s platform allows viewers to use their smartphones in landscape or portrait orientation, seamlessly adapting the viewing experience whenever the phone is flipped. Technically, this requires two versions of the show with different aspect ratios and a single soundtrack that syncs with both, all of which streams simultaneously to the mobile device. “The brief was to frame in 16:9 and in 9:16 for two separate deliverables,” Goldschmidt says. “The initial recommendation from Quibi was to shoot in 16:9 and then crop-in for the 9:16 — resulting, of course, in a much tighter shot.

“When I thought this through, it was apparent that if you made the conventional wide and two shot in 16:9, then as soon then as the phone is flipped, all your careful framing goes out of the window,” she continues. “I just wanted to see if there was a better way.” 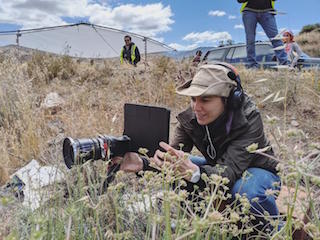 After consulting with peers who had previous experience framing content for mobile as well as with colleagues at Panavision, Goldschmidt opted for a new approach. “No one had yet done what we were about to do,” she says. “We were given a demo of the way the app was going to work and the tests they had shot. We then shot our own tests, facilitated by Mike Carter and [Panavision technical marketing director] Dominick Aiello, which we took all the way through the pipeline, including dailies at Light Iron and sitting down with final colorist Nick Hasson. Dual framing requires a lot of thought and not a little imagination.”

The first decision was to shoot full frame, working under the principle that it is better to work with more information than with less, particularly when it comes to the grade.

“I was initially thinking I could shoot a common top — a shared headroom between the frames — which would make it easier for the boom operator or to light from overhead,” Goldschmidt recalls. “But the more I scouted, the more I realized how much floor space there would be in 9:16. How could you position a shot that wouldn’t destroy both frames or make one unusable? This was the main challenge for myself, the camera operators and everybody to wrap our heads around.”

That’s when Goldschmidt suggested using the director’s viewfinder solution Artemis Prime. “I have been an avid user of Artemis as a scout tool on my phone,” she notes, “and I was delighted that Mike Carter was able to lend us an Artemis Prime finder to scout with during preproduction in order to demonstrate and visualize the two frames properly with the director, the producers and all my collaborators.”

The Artemis Prime viewfinder allowed Goldschmidt the flexibility of customizing multiple frame lines in situ while scouting, and to preview the results on an iPad. “The ability to take a lens to the location, move around and truly picture the scene happening in both frames was essential for me, the director and everyone I was working with, allowing us to be confident in our choices. It was a delicate dance to satisfy both frames, which are pure opposites.” 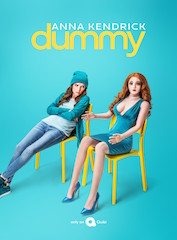 For her camera, the cinematographer adds, “We selected the Sony Venice and cropped the 6K sensor to a 4K square — and within that, we framed for 16:9 and 9:16 in a crucifix orientation. This way both frames were the same resolution, and the subject size stayed relatively equal in both frames. The two frames are unique, but both share the same middle portion. The crucifix position of the two frames and the ability to orient them the way we wanted was key.”

Although she would be cropping the large-format image horizontally, Goldschmidt was still using the entire height of the sensor, and therefore needed lenses that would cover the sensor vertically. “I tested a range of different Panavision large-format lenses and chose Panaspeeds primarily because I liked how fast they were and what they did for the depth of field,” she says. “I was conscious of the final smaller viewing format and wanted to use depth of field to have more control over where to direct the audience’s attention.”

She rounded out the set with Primo 70s, adjusted slightly to match the Panaspeeds, and a pair of zooms that, in the end, were rarely used.

To generate the three frame lines needed to compose in camera, the crew first turned on the Venice’s user frame line for the 1:1 square. Additionally, the A and B cameras each wore a Convergent Design Odyssey 7Q monitor, which served as frame-line generators for the 16:9 and 9:16 guides. “By placing the 7Q at the start of the signal chain,” Brunet explains, “we could pass those frame lines along to the operator’s eyepiece as well as to our Teradek transmitter for everyone else to monitor on set.”

Goldschmidt and Brock each had two 7” monitors, set up side-by-side to show the feeds from the A and B cameras. “I trusted Peter with the largest image/monitor on set, so he could let us know about focus issues or things we couldn’t see,” the cinematographer says. “I wanted the director and myself to have as close to the viewer’s experience as possible.”

Dailies were processed by Light Iron in Los Angeles, where Greg Pastore served as dailies colorist for the series. Deliverables included both 1×1 Avid media for editorial – preserving both the 16×9 and 9×16 frame – as well as a 16:9 extraction for studio dailies review.  When it came time to online the final episodes, the Resolve timelines were designed around the same 1×1 square input but were extracted and scaled from the original 6K Venice media to automatically create the two aspects from the editorial cuts. With the 1×1 square available in both editorial and the final grade, Goldschmidt was able to reframe the 9:16 image as necessary. 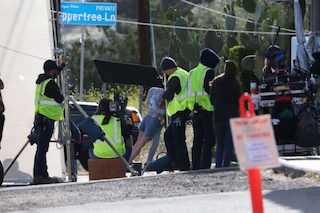 “Attending the final grade with Nick was essential,” Goldschmidt says. “We’d grade the 16:9 in DaVinci Resolve, then go back and transfer the same initial grade to the 9:16 so we weren’t starting from scratch. Then we’d tweak the 9:16 parts of the frame we hadn’t seen before. Sometimes we’d see things or change things and we’d have to go back again to the 16:9, but for the most part the process was fairly streamlined.” Working in the 1×1 square was equally advantageous to Hasson. He notes, “The 1×1 working area allowed all the tracking windows to automatically apply to both aspects because the pixel dimensions were the same, just extracted differently on the source frame.”

Dummy was also the first project on which Goldschmidt knew from the outset that she would be finishing in high dynamic range. She notes, “We monitored standard dynamic range on set, so it was important for me to sit with Nick ahead of time to look at the tests and know where we were going.”

Visual effects, which were required for elements of the show involving the sex doll, added to the complexity. Rather than employing separate pipelines for the 16:9 and 9:16 aspect ratios, the all-inclusive 1:1 frame was carried through editorial and visual effects.

“I couldn’t have done it without Mike, Nick, Peter and the whole Light Iron team,” Goldschmidt reflects. “I’m very grateful I was able to stay with the project all the way through final color, because although we were making definitive choices on set, the very nature of our specific workflow allowed those choices — such as the framing — to be massively changed later.

“The ‘1:1 square’ methodology worked well for our show, and I was really happy that we went that route in the end,” she adds. “In the final grade, we all got a kick out of seeing the show in 9:16 and realizing the unique beauty of some of those frames, which I don’t think would have happened if we had merely cropped in for that version. The final result gives the viewer more in every frame, no matter how they choose to hold the phone — and in this case, more is more!”