Size Matters on The Aviators Shoots 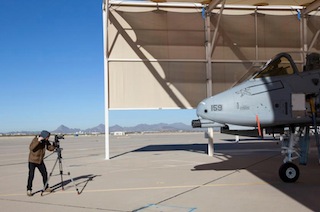 With that in mind, Lund and his crew have put together a flexible production kit to deal with the hectic nature of their shoots. One move that helped the crew to organize was the idea to deploy cameras that were all about the same size: Sony EX3, EX5 and the Canon 5D.

Lund’s Sachtler tripod systems also play a major role in this plan.  He uses SpeedLock 75 CF legs and FSB-8 heads for “everything.” The quick releases all match, so the crew doesn’t have to go hunting for a specific tripod or tools and hardware to change the release plate. “Any camera can go on any tripod, any slider can go on any tripod. We’re not constantly looking around for a tripod of a different size.” The same Sachtler fluid heads are mounted on slider or jib arms.

Most of the Aviator footage is shot outdoors, and Lund finds himself constantly changing lenses and other accessories. “The camera package weight’s always changing, and I just make my small counterbalance adjustments and get right back to shooting.”

Based on his long experience with Sachtler, he said he’s confident in the fluid head’s performance when he’s shooting at the telephoto end of his zoom lenses. “I do enjoy the Sachtler’s ability to do smooth pans while on the longer lens. I’ve always trusted the Sachtlers for the ability to do that.”

During a break in The Aviator’s production schedule, Lund took an assignment to shoot a research team working in the Arctic. Though the shoot was in the summer, without extremes in temperature, there were other environmental hazards for his equipment: wind and sand.

“It’s really like a giant sand quarry,” said Lund. “I was very worried about the camera, but I didn’t even have any concerns about the Sachtler tripod system. I knew how well sealed it is and that it was going to hold up.”