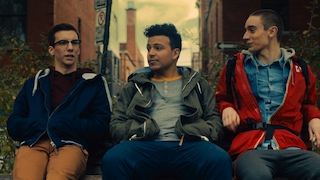 New hit comedy series Med, currently airing on VRAK 2, outlines the amusing antics of an insolent youth, with his two inseparable friends and eccentric parents. Produced by KOTV (Alain Chicoine, Louis Morissette and Louis-Philippe Drolet) and directed by François Bégin, the program premièred on January 7th. “Med is Slik's very first TV project to benefit from Mistika's creativity and has been well received, with our client more than satisfied. In fact, the broadcaster is ecstatic,” colorist Mathieu Marano said.

Slik's owner and founder Philippe Fafard says, “We initially purchased Mistika in April last year to expand our 4K color grading capabilities and replace the discontinued Avid DS station. However, we are planning even more significant integration following the positive outcome we have had using Mistika for this series. We are already working on many television commercials and can foresee the workload increasing further on an ongoing basis, which will keep our Mistika suite productive and occupied for the long-term.”

Using Mistika right from the start of the project gave the team at Slik a huge advantage. They were able to provide clear guidelines concerning lighting adjustments to director of photography, Jean-Philippe (Parish) Pariseau, using Arri Alexa ProRes 4444. “This saved us a tremendous amount of time when we came to the curtailed grading sessions within the project's budgetary constraints,” said Marano.

“To draw young adult viewers, our client wanted a very strong urban look for the show so that it couldn’t be mistaken for a standard sitcom that was shot in a studio with the cliché teal and orange, or bleach bypass,” Marano said. The tone of each scene had to be set using nuances of shades and color, which also served as a function to unite the various sets in the series. The park, school, director's office, teen and family rooms, all had to remain consistent as one unique universe. 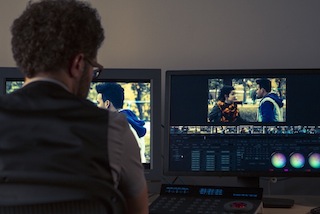 Marano mastered the visual ambience that KOTV were after. He said, “With the integration of LUT support directly in Mistika’s color grade effect, I was able to achieve an edgy look by using an old Kodak film LUT applied on the LogC footage. This was the base for the urban but vibrant look we ended up with. This base look was then worked with secondary grading so that it could be used on interior and exterior scenes with only minor tweaks required. We also assigned vector 3 and 4 to the main look, using a second one to adjust for the scene, and the primary to do the shot-by-shot grading.”

Color-controlling unpredictable weather conditions for outdoor scenes and having to even-out the main actors' skin tones were some of the other challenges Marano faced. He said, “The DOP's main concern was the sky, and fortunately, we were able to quickly resolve this. The details were easily retained in Mistika with a selection feature and mask used to reveal deeper contrasts in the highlights. This enabled me to make the clouds visible and breathe new life and hues of blue back into the sky.”

“Another example of where Mistika came to our rescue with its sheer brilliance of simplifying complex processes, was when I had to smooth out the tones of contrasting facial features that ranged from middle-eastern to reflective, almost albino-like snow white skin,” Marano added. “Since the three actors are mostly always present together in all of the scenes, I relied on masks and range controls to adjust each actor [one] at a time in Mistika, without getting any artifacts, with great success. I graded the two episodes in record time, so we still had time left to do some final digital make-up touches where applicable, and paint out remaining Alexa artifacts from the footage.”

Fafard said, “The SGO team, as well as Scalar, have been very helpful in fine-tuning our workflow infrastructure and systems. The Med TV series has proven to be the first opportunity where we could realistically battle-test our Mistika, and we are extremely pleased with the results so far. The new Mistika version is a superb upgrade and we look forward to what is coming next from SGO.”

Marano concluded, “The Mistika grading module is a solid grading solution with tools most colorists would die for. On top of that we are armed with a very powerful toolset with trackers and paint tools that we now take for granted. Clients are slowly letting go of the Flame in favor of the Mistika. That’s something for a Montreal post house.”