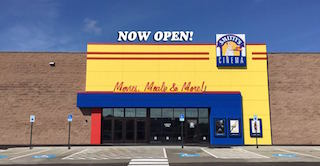 Smitty’s Cinemas was the brainchild of four brothers from Merrimac, Massachusetts who opened a single-screen cinema pub in early 1992. The idea of eating in big, comfortable chairs while watching a movie was an instant hit, and people are now enjoying five Smitty’s Cinemas across Maine and New Hampshire. The New England chain has installed laser projectors – NEC NC1100Ls – in several theatres. I recently spoke with one of the brothers, Tucker Smith, about their business model and about the new projectors.

Digital Cinema Report: According to your website, you and your brothers “opened a single-screen cinema pub in Merrimac, Massachusetts in early 1992. The idea of eating in big, comfortable chairs while watching a movie was an instant hit.” That was early for that business model and more than a decade before the widespread shift to digital cinema. Do you believe you were the first to operate a cinema pub?

Tucker Smith: We weren't the first to operate a cinema pub, but we have been credited with being the first to operate a cinema pub with first-run films. We have always loved the concept and we believe that the model is more relevant now than ever. Being able to provide a more unique movie going experience to today's customer has been very valuable in setting our cinema apart from most traditional theaters.

DCR: What are the costs and benefits of laser projection?

TS: The obvious cost benefit would be the lower cost of maintenance. With laser projection, you don't have to change out bulbs every 4 to 6 months. A less obvious cost savings came from the way we were able to design our newest theater around the use of the NC1100L. We mounted the projectors in the back of the auditoriums and eliminated the projection booth completely. This was a big savings in construction cost. 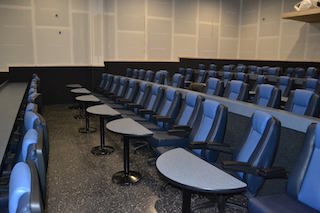 DCR: When did you first make the transition to digital cinema technology?

TS: We started the transition to digital cinema in 2009. We added one or two 3D-capable NEC projectors in each of our theaters. Within the next year we switched completely to digital.

DCR: Today, you and your partners operate five theatres across Maine and New Hampshire. How many screens are there in the five theatres?

DCR: Are they all based on your cinema pub model?

DCR: Have you ever operated a theatre without that model? 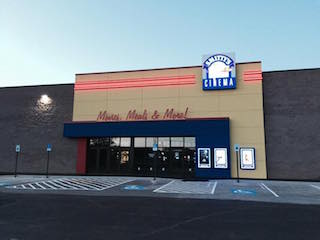 DCR: How big are your screens?

TS: Most of our screens are approximately 12 feet by 20 feet.

DCR: How many of the screens have laser projection?

TS: Seven of our screens use laser projection.

DCR: What was the appeal of laser projection for you?

TS: The appeal was the savings in construction costs.

TS: We have used NEC projectors at all of our theaters and have been very pleased with their performance. When we heard that there was a laser version, we knew that it was something we wanted to try.

DCR: How did you finance the purchase of the projector?

TS: The purchase was financed by our local bank.

DCR: How, if at all, have your customers responded to laser projection?

TS: For the most part they don't even notice. Occasionally, people will mention how it is cool to see the projector mounted in the back of the auditorium. A big benefit that the customers don't notice is that there is no dimming of the picture as the bulb gets to end of its useful life.

DCR: How complicated was it to make the switch from traditional lamp projection?

TS: Our screens using laser were all built for the use of the laser projector, so it wasn't a hard transition.

DCR: Was there a learning curve for you and your staff regarding operating the NC1100L?

TS: Not at all, they operate nearly identically to the non-laser version. Also, because the booth was eliminated, all the servers are rack mounted in the manager's office making operation even easier and more convenient.

DCR: Will you eventually switch to all laser projection?

TS: We would like to when the need arises, but our current non-laser NEC projectors are still running strong.

DCR: How many of the screens across your chain are 3D?

TS: Six of our screens are 3D capable, however, we stopped showing 3D movies over a year ago. We found that there wasn't a strong demand for 3D at our theater. The glasses complicated the dinner and movie concept and wasn't very enjoyable for our guests.