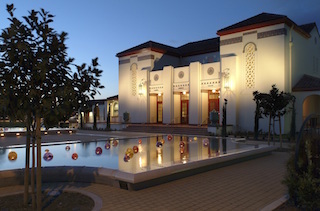 The Society of Motion Picture and Television Engineers has lined up a series of Entertainment Technology in the Connected Age conference sessions focusing on the technologies and tactics that will make the connected world a reality.

Scheduled for June 27-28 at the Heritage Theatre in Campbell, California, and subtitled The Race Is On!, ETCA 2016 will explore how emerging technologies are impacting the delivery of a compelling connected entertainment experience. Roberto Baldwin, senior editor at Engadget, has been confirmed as moderator for the keynote session, The Future of Home Entertainment in a Connected World: A Warner Bros. Perspective, presented by Ron Sanders, president of Warner Home Entertainment. Roy Taylor, corporate vice president at AMD, will deliver the other ETCA 2016 keynote, titled VR and the Race to Real. A variety of panel sessions will build on these topics by spotlighting the specific technologies that are driving the industry toward a connected world.

The Live Through the Internet: Here Today, Even Better Tomorrow panel will feature moderator Eric Grab, founder of Disruption Wave, along with Will Law, chief architect at Akamai; Nils Krahnstover, engineering lead for YouTube Live; Martin Hess, senior director of engineering at Twitch TV; and Kumar Subramanian, CEO at MediaMelon. These experts will address the challenges and potential of live internet video and look ahead to shifts in live coverage as the internet and video technology advance.

Moving to the hot topic of high dynamic range images, the HDR: The Silver Bullet for Connected Content? panel will look at the impact of HDR — widely touted as offering the best bang for the buck — and service provider bits, as well as the challenges related to live production and real-time delivery. Led by moderator Annie Chang, vice present of technology at The Walt Disney Studios, the panel will include technologists and executives who are making HDR services happen now and in the near future. Speakers will include Michael Zink, vice president of technology, Warner Bros.; Robin Atkins, senior manager, Applied Vision Science at Dolby; Matthew Goldman, senior vice president of technology, TV & Media Strategy at Ericsson; and Steven Robertson, software engineer at YouTube, part of Google.

Disney's Chang also will be a panelist for Interoperable Mastering Format: A Must in a Connected World, which will feature Chris Fetner, director of global content partners operations at Netflix, and Craig Seidel, vice president of distribution technology at MovieLabs, along with MovieLabs CTO Jim Helman as moderator. They will discuss the inefficiencies that plague distribution of localized audio and subtitle tracks — and, in the case of animated productions, alternate visuals — and discuss the componentized delivery technologies that are assisting productions in handling the proliferation of localized versions of content.

A panel titled The Future of Video Encoding will examine the ongoing advances in encoding technology, accelerated by the recent launch of new working groups, exploratory teams, and alliances. Pat Griffis, who is SMPTE education vice president, ETCA 2016 program committee chair, and vice president of technology in the Office of the CTO at Dolby Laboratories, will serve as moderator. Panel speakers will include Gary Sullivan of Microsoft, who is chair of ITU-T VCEG and co-chair of Video for ISO/IEC MPEG, and Debargha Mukherjee, a member of the technical staff-video and codec specialist at Google. The group will examine the coding technology approaches of the future — including a consideration of entirely new paradigms such as replacing objects with synthesized models and avatars — as well as the technical challenges of the big screen versus the small screen.

"The media and entertainment industry's rapid innovation and the possibilities enabled by instant software upgrades are combining to transform media and its distribution," said Griffis. "Sessions at ETCA 2016 will offer insight into how the connected world is changing entertainment, while also providing an actionable understanding of technology and application trends."

An ideal event for engineers, creatives and researchers focused on the future of connected entertainment; ETCA 2016 will feature an array of additional conference sessions exploring how the convergence of connectivity, bandwidth, and technology improvements is revolutionizing entertainment.

Online registration and further information about the full program schedule are online at www.etca2016.org and the SMPTE Events mobile app, available for download at https://crowd.cc/s/dvwo.

More information about SMPTE is available at www.smpte.org.