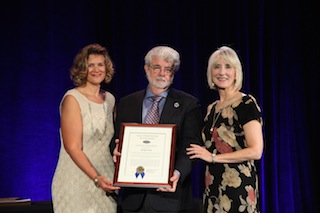 The Society of Motion Picture and Television Engineers’ top honors were conferred on Leonardo Chiariglione, George Lucas, John Logie Baird, and Ioan Allen at the SMPTE 2014 Honors & Awards Ceremony last month in Hollywood. Chiariglione and Lucas were given the Society's highest accolade, the status of Honorary Membership; Baird (1888-1946) was named to the Society's Honor Roll; and Allen was awarded the Progress Medal.

Held Octover 23 at the Loews Hollywood Hotel in conjunction with the SMPTE 2014 Annual Technical Conference & Exhibition, the Honors & Awards Ceremony and Dinner recognized pioneers from across the motion-imaging industry. The evening event was hosted by award-winning television and radio news anchor Frank Mottek and sponsored by IMAX, with support from TV Pro Gear, Canon, EIKI, and voice talent Deborah Alexander.

The Honorary Memberships conferred upon Chiariglione and Lucas recognize individuals who have performed eminent service in the advancement of engineering in motion pictures, television, or the allied arts and sciences. Matthew Goldman, SMPTE finance vice president and senior vice president of TV compression technology at Ericsson, accepted Honorary Membership on behalf of Chiariglione, who is generally considered to be the driving force behind the development of the MPEG set of standards that underpin today's many digital moving-pictures applications. His constant push for a simple, standardized moving-pictures toolbox began in 1988 with the founding of the International Standards Organization Moving Pictures Experts Group. Chiariglione has forcefully maintained focus on timely standardization, technical simplicity, and efficiency. The wide adoption of MPEG-2 to MPEG-4, in particular, is apt testimony to the contribution Chiariglione and the MPEG group has made to date. 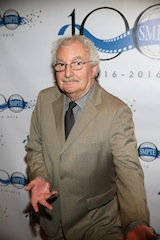 In addition to serving as writer, director, and producer for iconic American films, Lucas has pioneered adoption of new technologies for motion picture production and exhibition. In 1975, he founded Industrial Light & Magic, which has not only produced visual effects for nearly 300 films, but also invented the OpenEXR file format to support high dynamic range imaging. The animation studio Pixar was founded as the Graphix Group of Lucasfilm in 1979, and sound company THX was co-founded by Lucas in 1983 to advance the quality of theatrical sound systems. Released in 2002, Star Wars: Episode II — Attack of the Clones was the first major Hollywood feature to be captured digitally, on 24p high-definition video cameras.

In accepting his award at the SMPTE ceremony Lucas said, "I owe it to a lot of people, a lot of engineers, a lot of talent who immediately said, 'Well, we can't do that; it's impossible,' and I said, 'Go do it anyway.' They came through for me, almost every single time, and we pushed the envelope. Art is basically technology, and all art and all artists bump up against that technology ceiling. Fortunately, I had a lot of people around me. I could say, 'I want to go there. See how you can make that happen because I need to go there for my story.'" Following reflections on his past achievements, Lucas concluded his speech by restating the influence of SMPTE throughout his career, saying, "I've lived with SMPTE my whole life, and it's a great honor to be part of the organization."

Peter Weitzel, secretary/treasurer of the SMPTE U.K. Section, accepted the SMPTE Honor Roll award on behalf of Baird's family by reading an acceptance letter from Baird's son. Conferred posthumously, the award recognizes individuals who were not awarded Honorary Membership during their lifetimes but whose contributions would have been sufficient to warrant such an honor. Baird's accomplishments include the first live television demonstration (1925), the first publicly shown color television system (1928), and the first fully electronic color television picture tube, adopted a year later by the British Broadcasting Company (BBC). Baird continued to develop new technology throughout his life, including a mechanical color system in 1939 (adopted by CBS/RCA); a 500-line 3D system in 1941; and an electronic 600-line color display in 1944. Baird lobbied for postwar standardization of his 1,000-line electronic color television system.

The Progress Medal, SMPTE's highest medal award, was presented to Allen, who is senior vice president at Dolby, in recognition of his outstanding technical contributions to the progress of engineering phases of the motion picture, television, or motion-imaging industries. His innovations in sound research and development programs at Dolby Laboratories include Dolby Stereo, Dolby Spectral Recording (Dolby SR), and Dolby Digital; he also has made ongoing contributions to worldwide standards organizations.

"Honoring leading figures such as John Logie Baird, Leonardo Chiariglione, George Lucas, Ioan Allen, and many other industry luminaries, the Honors & Awards Ceremony this year showcased motion-imaging innovation spanning nearly a century," said Wendy Aylsworth, SMPTE president. "The remarkable technical achievements of these honorees and award winners are both humbling and inspiring, and this year's event gave us a rare and wonderful look at the minds and personalities behind the evolution of film and television."

The Society of Motion Picture and Television Engineers www.smpte.org/join