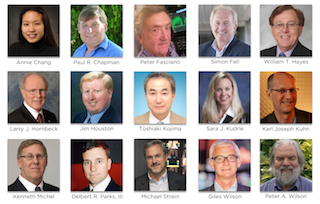 The Society of Motion Picture and Television Engineers has elevated 15 industry leaders to the status of SMPTE Fellow. This honor is conferred on individuals who have, through their proficiency and contributions to the industries, attained an outstanding rank among members of the Society. New SMPTE Fellows will be elevated on October 28, during the Fellows Luncheon, held in conjunction with the SMPTE 2015 Annual Technical Conference & Exhibition at the Loews Hollywood Hotel in Los Angeles.

Annie Chang oversees the research and implementation of new technology within Disney's feature post-production and mastering pipelines through new file-based workflows and standards efforts. She is the chair of the SMPTE Interoperable Master Format (IMF) Working Group and represents Disney in the UHD Alliance as a board director. Prior to Disney, Chang spent six years at THX Ltd. as the senior engineer for the Digital Mastering Program and three years in DVD authoring and compression. She holds a Bachelor of Science in engineering technology from Texas A&M University.

Paul Chapman has worked in the video and post-production industries in Los Angeles for more than 25 years, having come from the U.K. after a career in software engineering. Early in his career, he was very active in the telecine community, working for both manufacturers and users such as Rank Cintel, Unimedia and Complete Post, and Unitel Video. In 1996, Chapman joined FotoKem, holding a variety of engineering leadership positions and, in his current role, takes responsibility for evaluating, recommending, and implementing all aspects of digital technology companywide. He is a past chair of the SMPTE Hollywood Section and a current SMPTE Hollywood Region Governor.

Peter Fasciano designed, built, and managed television stations and teleproduction studios throughout the 1970s and in the 1980s founded a successful film and video production company. He then worked with Bill Warner to launch Avid in 1987 and design the interface for Avid's first product, the Media Composer nonlinear editor. As vice president and corporate fellow for Avid Technology's Advance Product Development Group, he designed, developed, and prototyped AirPlay, the first play-to-air, fully automated video server; EditCam, the first tapeless video camcorder; Digidesign's AudioVision; and the Avid Unity enterprise media server system. He holds more than 20 patents, and his design research defined new product categories that have been honored with seven Emmy Awards and two Oscars.

Simon Fell leads the team spearheading developments in media technologies at the EBU. He has four decades of experience, formerly with ITV as director of future technologies. Previously, he helped establish Carlton Television, where he held several executive positions and participated in the digital broadcasting launch. Fell has chaired the Technical Council at the U.K.'s Digital Television Group (DTG) and was chairman of the HD Forum. Additional roles include serving as director of engineering for rushes and chief engineer of 625, and establishing Channel Four, where he assisted in the introduction of Super 16 film. Fell's early career included periods with Rank Cintel in the U.S. and with YTV in Leeds, U.K.

William T. Hayes has worked in radio and television broadcasting since 1973, garnering extensive experience in planning, designing, and constructing television stations. He currently is responsible for the planning and development of all technology projects at Iowa Public Television, and he is active in future broadcast planning nationally and internationally, serving on a number of committees developing standards for emerging technologies such as mobile/hybrid television and the next generation of terrestrial digital television. Hayes is the SMPTE Central Region Governor and, as a senior member of the Institute of Electrical and Electronics Engineers (IEEE), serves as the president of the IEEE Broadcast Technology Society (BTS). He is also a member of the Society of Broadcast Engineers (SBE), which named him Educator of the Year in 2007 and the Society of Cable Telecommunications Engineers (SCTE).

Solid-state physicist, Larry J. Hornbeck has spent most of his 40-year research-and-development career at Texas Instruments developing microdisplays, first in TI's Central Research Laboratories and later in DLP Products. Following a decade of research on analog technologies that fell short of expectations, he invented the digital micromirror device (DMD), a chip technology (the DLP chip) that provides for the high-speed, digital manipulation of light and enables products including the DLP Cinema projectors popular today. Hornbeck holds 38 U.S. patents, and his numerous awards and honors include a 2014 Academy Award of Merit (Oscar® statuette), induction into the National Inventors Hall of Fame, the SMPTE 2002 David Sarnoff Medal Award, and a 1998 Emmy Engineering Award. He is a member of the National Academy of Engineering (NAE) and a Fellow of the IEEE and SPIE.

Jim Houston currently consults on digital production and new technologies for motion pictures and television. Earlier, while vice president of technology and engineering for Sony Pictures, he designed and built the Colorworks 4K post-production facility. For 30 years, he has developed or managed digital production facilities for animation, visual effects (VFX), restoration, and post-production for Disney, Sony, and several post-production companies. He has received two Academy Scientific and Engineering Awards and led two projects winning 2012 Engineering Emmys. He is a member of the American Society of Cinematographers (ASC) Technology Committee, serves as cochairman of the Academy of Motion Pictures Arts and Sciences (AMPAS) Academy Color Encoding System (ACES) Project Committee, and is active in standards development for digital cinema, ultra-high-definition television (UHDTV), metadata, and future display systems.

Toshiaki Kojima has worked in both the audio/video (AV) and information technology (IT) industry sectors over the past 33 years. For the first 20 years of his career, Kojima was involved mainly in the design of professional video tape recorders (VTRs), from 1-inch to the e-VTR, and he received a 2004 Sports Emmy recognizing the role of the e-VTR in NBC's Athens 2004 Olympics coverage. He since has moved into research and development with the aim of replacing dedicated professional AV interfaces with those of general Internet protocol (IP). Kojima is an active participant in network-related industry and standardization bodies including Framework for Interoperable Media Services (FIMS), Video Services Forum (VSF), SMPTE, and the Joint Task Force on Professional Networked Streamed Media (JT-NM). He holds 20 Japanese and international patents and is an MIT Fellow.

Sara Kudrle began her career as a broadcast industry engineer at Tektronix, where she worked in the VideoTele.com business, and then joined the TV transmitter group at Continental Electronics, which later became Axcera, working on exciter control software and single-frequency networks (SFNs). From there she moved on to Miranda/NVISION, where she handled several projects within the router control group, and, most recently, joined Grass Valley. She has authored papers for NAB, PBS, and SMPTE conferences and has been published in the SMPTE Motion Imaging Journal and Broadcast Engineering, earning the SMPTE 2012 Journal Award for "Fingerprinting for Solving A/V Synchronization Issues Within Broadcast Environments." She holds a Bachelor of Science in computer science with a minor in mathematics from California State University, Chico. Kudrle is a former SMPTE secretary/treasurer for Sacramento and is the current SMPTE Western Region Governor. She is also a member of IEEE.

Karl Joseph Kuhn is senior video systems application engineer with Tektronix, supporting test and measurement solutions for digital audio and video, compression, IP, file-based, and radio frequency (RF). He has been at Tektronix for 15 years and is deeply involved in presenting at industry events and providing technology training for his customers. Kuhn earlier was the lead video test engineer for IBM's Digital Video Development Laboratory. He holds three U.S. patents and one Japanese patent that cover in-service testing of digital broadcast video. Kuhn served on the National Academy of Television Arts & Sciences (NATAS) Technical and Engineering Emmy Committee from 2006 to 2010 and is past chairman of the SMPTE Washington, D.C., Section and past SMPTE Eastern Region Governor. He currently serves as SMPTE North American membership director.

Kenneth Michel spent 34 years at Disney/ABC in the broadcast operations and engineering division of the ABC TV network, serving as the vice president of engineering for 17 of those years. With more than 25 years in the ABC engineering lab, he helped to develop many products used in the TV industry today. Michel was instrumental in transitioning the industry to HDTV and in facilitating the adoption of progressive scan. He has been awarded five U.S. patents (two pending) and has received nine Disney Inventor Awards, two technical Emmy Awards for his work on the 1984 Olympics and the 1989 World Series, and a Primetime Emmy Award. He chaired the IEEE committee that revised the IEEE 208-1960 standard on how to measure camera resolution.

Delbert R. Parks III has been with Sinclair Television Group since 1972, moving up through the ranks since he began in the engineering department of Sinclair's flagship station, WBFF-TV in Baltimore. In his current executive position, Parks handles planning, organizing, and implementing of operational and engineering policies and strategies as they relate to television operations, Internet activity, information management systems, and infrastructure. He is a member of the SBE and serves on the board of directors of the Baltimore Area Council, Boy Scouts of America. He is a retired Army lieutenant colonel who held various commands during his 26-year reserve career.

Michael Strein, Director of Technology and Workflow at ABC-TV

Over the past 25 years, Michael Strein has been at the forefront of virtually every technical advancement that the ABC network has made, from the analog-to-digital conversion, to the HDTV transition to the launch of the WATCH ABC streaming platform. Strein has earned 14 Disney Inventor Awards that have resulted in seven patents, with several others still in process. He has served on the SMPTE New York Section board of managers as television program chair since 1997, earning the SMPTE Citation for Outstanding Service to the Society award in 2010. He maintains an extensive involvement in the vendor and standards communities.

As head of Ericsson's TV compression business, Giles Wilson oversees the strategy, vision, and development of the company's industry-leading compression technology portfolio to ensure that it meets the content acquisition, exchange, and delivery requirements of broadcasters and operators around the world. He has played a pioneering role in the company's 20-year heritage of creating next-generation compression solutions and has been instrumental in developing the technology architectures and solutions for many of today's leading TV experiences, including the world's first MPEG-4 AVC HD encoder, which was recognized with an Emmy Award for its technical innovation. Earlier executive roles include the head of TV technology at Ericsson, as well as chief architect and, subsequently, senior vice president of technology at Tandberg Television.

Peter A. Wilson began his career at 15 with an electronic and mechanical apprenticeship and subsequently worked in TV studio engineering before joining Sony Broadcast. He moved into HDTV in the mid-'80s, working on high definition (HD) productions, including the very first feature movie shot in HD, and eventually (for Sony Europe) setting up Europe's first HD-to-35mm film-out facility using electron beam recording technology. In 1998, he helped to organize the technical facilities for the first digital cinema demonstration at IBC Brighton and today, as a founding director of the European Digital Cinema Forum (EDCF), he continues to focus on digital cinema interoperability. During his time at Snell & Wilcox, he earned a Technical Emmy for work on HD upconversion. Through HDDC, he now provides training in HDTV, UHDTV, and digital cinema matters. He is a British Kinematograph, Sound and Television Society (BKSTS) Fellow, director of the EDCF and Event Cinema Association (ECA).

Further information about SMPTE 2015 is available at www.smpte2015.org.