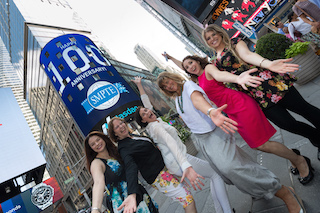 The Society of Motion Picture and Television Engineers will host a greatly expanded exhibit space to accommodate a more extensive demonstration of new technologies, as well as a variety of amenities to celebrate the Society's centennial.

The new Centennial Hall added for SMPTE 2016 will feature:

An Oktoberfest reception with German-themed appetizers, open to all SMPTE 2016 attendees on October 26

"We designed this new space to be inviting to exhibitors and attendees alike," said SMPTE executive director Barbara Lange. "Conveniently located on the same level as the Ray Dolby Exhibit Hall and technical conference sessions, Centennial Hall will offer many features that enrich attendees' experience. Special exhibits will provide a look at some of the industry's oldest and newest technologies, while the beer garden will provide a great space for a quick meeting, enjoying a beverage, or just relaxing and socializing whenever Centennial Hall is open."

SMPTE 2016 takes place October 25-27 at the Hollywood and Highland Center in Hollywood, California, and is expected to attract more than 2,000 attendees.