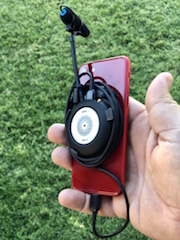 When Gene Martin, owner of Audio Department and Sound Guy Solutions, was presented with a technical nightmare for a commercial client in the early days of COVID, his sound mixer gears started turning. With scenes being shot in separate areas around the U.S., Martin had to juggle as many as 10 different drop kit audio packages at a time. As he was on-location with the main crew in California, he also had to account for remote workflows as well as social distancing protocols.

“The commercial was shot as a series of video chats from mobile devices and laptops, so we needed something where the actors could be walking around with their phones and not have a large recording device with them,” says Martin. “The client was happy with the video from the devices but was looking to drastically improve the audio. It just so happened that, right at the start of this project, the DPA 4097 Micro Shotgun was introduced. I was originally going to use the DPA 4060 because its higher sensitivity would benefit us being able to have the mic further from actors’ faces. Then, the 4097 was introduced and it was the perfect little microphone for this application; everything from the design to the sound was exactly what we needed.”

In addition to superior audio quality, the size of the setup played a big role in Martin choosing DPA. “Our first point of business was to find an interface or recorder that was small enough to mount to the mobile device,” he explains. “The DPA MMA-A gave us the ability to easily switch between the phone and computer interfaces. Add to that the fact that we could thread the 4097 directly onto the MMA-A and attach it all right to the back of the phone, and we had the perfect little microphone positioned right above the camera.” The DPA system also worked well when the actors switched to scenes in which they were using laptops. “This small, lightweight microphone and audio interface combination attached directly to the back of the computer,” adds Martin. “What we ended up with was audio from a high-end, broadcast-quality directional microphone that was much better than the internal microphone on the devices. This helped us capture exactly what we needed to focus on – not a lot of the background ambiance, but rather really just single-in on our talent.”

The integration between the 4097 Micro Shotgun and the MMA-A Digital Audio Interface also proved to be especially beneficial on-set. “The simple setup between the interface and the microphone made it really easy for us to walk through the set and just change a couple of settings when necessary,” continues Martin. “It also meant we were able to eliminate a lot of other gear and adapters that might otherwise have been necessary to make this shoot possible.” 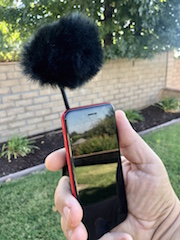 Since wrapping that shoot, Martin says he’s seen a significant uptick in requests for similar setups from his customers. “DPA makes quality, top of the line equipment, and we try to push it every chance we get,” he says. “For anyone who has needed to accomplish similar shoots to things I’ve done, I always share my insight and experience. The MMA-A/4097 combo not only became a very commonly requested setup for other similar cell phone-style jobs I worked on, but they became heavily rented and purchased items at the shop as well.”

For Martin, his experience with DPA mics began back when the 4017 Shotgun Microphone was introduced, so he certainly has a lot of experience to share with customers. “Soon after finding the 4017, I switched over to only using DPA’s lavalier mics,” continues Martin. “I think I own variations or multiple quantities of every tool that DPA makes. They’re my go-to microphone for most situations.”

A sound mixer by trade, Martin got his start in the industry in 2001, straight out of high school. After working for Dateline NBC, he made the jump to commercial production, but has also worked on feature films. As a sound mixer, Martin found himself unsatisfied with his options of audio equipment suppliers, so he co-founded Audio Department in 2008 with former general manager Frank Scibella. Based in Burbank, California, Audio Department primarily serves the commercial, film, television and documentary industry, providing professional-grade equipment. Martin is also the owner of Sound Guys Solutions, a product manufacturing company.