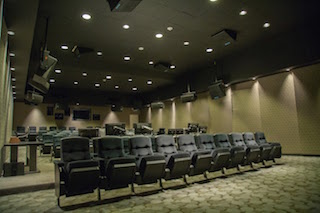 The new stage, which is equipped with a 24-fader Avid S6 mixing console, is the only dub stage on the West Coast that uses IMAX loudspeakers and meets specifications for mixing in its immersive IMAX 12.0 sound format. The room will be used to prepare 2D and 3D theatrical features and trailers for release to IMAX theaters worldwide.

The stage is located in the Jimmy Stewart Building on the Sony Pictures lot in Culver City. Sony Pictures engineers worked with their counterparts from IMAX Corporation to install and align the IMAX 12.0 system. “We are excited to offer this new resource to the motion picture community,” said Sony Pictures Post Production Services executive vice president Tom McCarthy. “We are committed to supporting all theatrical sound formats and are particularly impressed with the dynamic quality of IMAX 12.0.”

“We’re delighted to have Sony’s new mix stage, which was specifically designed and equipped for the new IMAX 12.0 and 5.0 sound formats, become available to mix and optimize films being presented in the IMAX format,” added Bruce Markoe, senior vice president and head of post production, IMAX Corp. “We look forward to working with their great teams to help bring our enhanced sound formats to IMAX audiences worldwide.”

Sony Pictures Post Production Services’ new stage will provide California-based studios with an alternative for preparing titles for IMAX release. “We will provide studios and production companies with an efficient solution so they can get their titles out to IMAX theaters promptly,” noted Sony Pictures Post Production Services lead engineer Nathan Oishi. “Having access to a local source will make it easier for studios to manage the review and approval process, and help improve quality.”