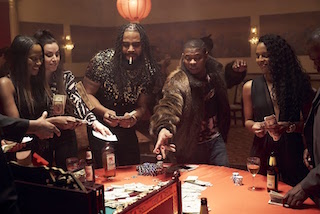 Superfly is Columbia Pictures’ reimagining of Gordon Parks Jr.’s classic 1972 crime drama that defined its genre through its characters, look, sound and feel. Helmed by Director X and written by Alex Tse, the new movie transports the story of Priest (Trevor Jackson), from Harlem to modern-day Atlanta and reenergizes its vibe for a new generation. The movie’s sound team from Sony Pictures Post Production Services, led by supervising sound editor Steven Ticknor, supervising sound editor and re-recording mixer Kevin O’Connell, re-recording mixer Greg Orloff and sound designer Tony Lamberti, was tasked with bringing the sonic elements of Priest’s world to life. That included everything from building intricate soundscapes for Atlanta’s neighborhoods and glitzy nightclubs to supplying the thunderous fireworks for gun battles and car chases.

“Director X and Joel Silver (who produced the movie alongside hip-hop superstar Future, who also curated and produced the film’s soundtrack) wanted the film to have a big sound, as big and theatrical as possible,” says Ticknor. “The film is filled with fights and car chases, and we invested a lot of detail and creativity into each one to bring out their energy and emotion. We had a great team and everyone gave it their all to produce a great soundtrack.” 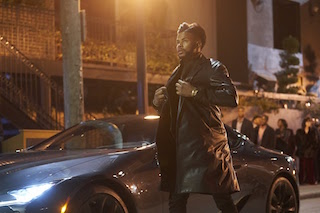 One element that received special attention from the sound team was the Lexus LC500 that Priest drives in the film. As the sleek sports car was brand new, no pre-recorded sounds were available, so Ticknor and Lamberti dispatched a recording crew and professional driver to the California desert to capture every aspect of its unique engine sounds, tire squeals, body mechanics and electronics. “Our job is to be authentic, so we couldn’t use a different Lexus,” Ticknor explains. “It had to be that car!”

In one of the film’s most thrilling scenes, Priest and the Lexus LC500 are involved in an explosive, high-speed chase with a Lamborghini and a Cadillac Escalade. Sound artists added to the excitement by preparing sounds for every screech, whine and gearshift made by the cars, as well as explosions and other events happening alongside them and movements made by the actors behind the wheels.

It’s all much larger than life, says Ticknor, but grounded in reality. “The richness of the sound is a result of all the elements that go into it, the way they are recorded, edited and mixed,” he explains. “We wanted to give each car its own identity, so when you cut from one car revving to another car revving, it sounds like they’re talking to each other. The audience may not be able to articulate it, but they feel the emotion.” 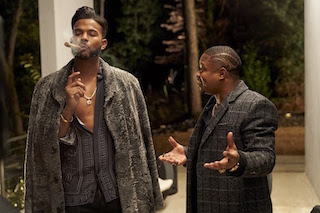 Fights received similarly detailed treatment. Lamberti points to an action sequence in a barbershop as one of several scenes rendered partially in extreme slow motion. “It starts off in real-time before gradually shifting to slo-mo through the finish,” he says. “We had fun slowing down sounds, and processing them in strange and interesting ways. In some instances, we used sounds that had no literal relation to what was happening on the screen but, when slowed down, added texture. Our aim was to support the visuals with the coolest possible sound.”

“We were fortunate to have in Kevin and Greg, a pair of Academy Award-winning mixers, who did a brilliant job in blending music, dialogue and sound effects,” says Ticknor. “The mix sessions were very collaborative, with a lot of experimentation to build intensity and make the movie feel bigger than life. Everyone was contributing ideas and challenging each other to make it better, and it all came together in the end. It was a fantastic experience.”