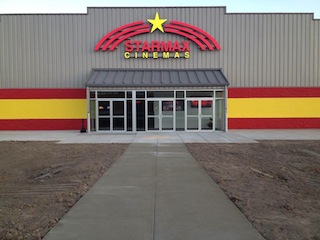 One of the promises of digital cinema technology was that it would enable new theatres to be built in places that had gone years without a movie house. That promise is has been fulfilled in Vandalia, Illinois where owner Rick Cripe recently opened the Starmax Cinemas and installed one of the first NEC NC1100L 2K laser projectors.

Vandalia is a small town in Fayette County in rural Central Illinois, population just under 7,000, located on the Kaskasia River 69 miles northeast of St. Louis. For twenty years in the 1800s it was the state capitol and a young lawyer named Abraham Lincoln argued cases in its courthouse. Today, as with many small Midwestern towns, it’s not what it once was. Until this summer, and for many years, the nearest theatre to Vandalia was miles away. That changed this summer when Cripe, a professional contractor by trade, believed the community needed its own theatre and did something about it. He says digital cinema technology made his new theatre possible.

There were other factors that led Cripe to get into the exhibition business. Before he opened Starmax Cinemas he says, “Some nights my kids were driving 37 miles one way to see a movie.” As the father of two teenagers who love movies, as do he and his wife, this concerned him. A forty-mile drive in some communities might seem like a relatively minor thing. As someone who lived in Central Illinois for many years, I can speak from experience when I say that an eighty-mile drive in that area can be a very big deal, especially in the winter.

“Our town seemed to need something,” says Cripe. As a successful businessman (his wife also runs a successful beauty salon in town) he saw another potential business opportunity, one that had the added benefit of enabling him “to give something back to the community.”

Cripe began his research in 2012 and spent more than a year studying the exhibition business. He and his family visited all the theatres in their area and made a point to always see a movie wherever they went on vacations or other family trips. He said one thing that stood out for them was that, “Too many of the places we visited seemed to have lost touch with customer service.”

Using the equity in his contracting business, Cripe chose not to pursue a virtual print fee deal and instead got conventional financing for the new construction. After years in the construction business he felt confident to design the floor plan himself. His understanding of his community and his research led him to build a four-screen theatre. 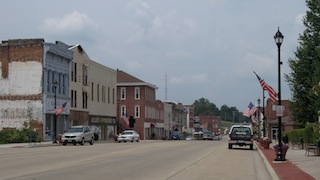 He chose Masterimage 3D over other possibilities based on the price. Cripe says, “I got some used Masterimage technology with a good deal. RealD wanted a big deposit and fifty cents a head didn’t equate.”

Cripe manages most of the screenings himself and says the new technology presented a bit of a challenge but there have been few bugs. Three months into the venture he’s getting the hang of it. His staff has found some things difficult to grasp at first but the biggest challenges for all of them were the terminology and the schedule.

Despite all that and the dreadful summer box office, Cripe is already toying with the idea of building another theatre in the area. He said he’s found all his vendors and even his competitors to be “pretty cooperative” so far.

When he opened, Cripe was determined the make Starmax Cinemas a place where the community felt at home. To that end he offered free refills and all you can eat concessions. “It’s costing us money,” he admits, but he believes it’s worth it to gain traction.

This summer’s dismal box office numbers – officially the worst since 1997 – have not helped Cripe in his early days as a theatre owner and, as with the rest of the exhibition industry, he’s counting on the fall and winter movies to resuscitate the business. Meanwhile, he’s focusing on the tasks at hand, one of which is being aggressive with his social media outreach. A good example of that is the Starmax Cinemas Facebook page that already has attracted more than 2,800 followers and patrons who add photos regularly. https://www.facebook.com/StarmaxCinemas

As it says on the Starmax Facebook page, one thing is certain: “Going to dinner and a movie no longer requires you to leave Fayette County.”