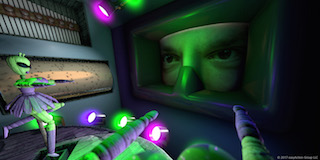 Extravaganza is an immersive experience where the viewer puts on a VR headset and becomes a programmed puppet forced to perform in a ludicrous show for a clueless executive (Scheer). But things aren’t exactly what they seem and the viewer might yet break free of their programming. Extravaganza asks the question, does technology change society for the better, or does it simply magnify our worst traits in new ways? 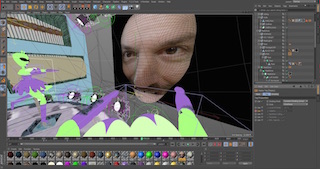 “In Extravaganza the viewer finds themselves in the novel position of being 'consumed' by an audience, subjected to their insults and confronted with many of mainstream entertainment’s blind spots and prejudices,“ said Shaftel. “Using Maxon’s 3D and virtual reality filmmaking tools allowed us to create an immersive environment so that we could bring assumptions to the surface we have about how stories are told that couldn’t otherwise be told in a traditional film medium.”

For the past five years, at his easyAction production studio, Shaftel and his lead animator Frank Stringini have relied on Cinema 4D as a visual effects and animation content creation tool on film projects, video installations for leading brands including Nike and Tokyo Disney and screen content for recording artists including Rhianna, as well as for a number of experimental or unfinished VR projects, mainly prototypes and experiments. Extravaganza is the filmmaker’s first complete film in the nascent medium with an original cast and music.

“One of the cool things we did with Extravaganza is to combine our live-action actor Paul Scheer, filmed with a traditional non-VR camera, within a fully 3D-animated world. When Scheer lifts up the VR puppet show where the viewer is 'inside' and straps it to his face, he is fully a part of their environment, staring down at them and the other VR puppets,” said Shaftel. “This required us to work out some tricky projection-mapping style techniques in Cinema 4D to blend the real footage and the animation. We also relied on the Xref tools to instance our mechanized instruments to better synch with our musical score, the Point Level Morph for our inflatable ballerinas, and various Character Constraint tags to rig-up all our puppets and the mechanized moving stage together.” 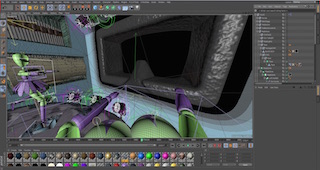 Virtual reality film content creation is challenging Shaftel said because of the huge resolutions required in order to get a good quality render anywhere the viewer looks. “Before we discovered CV-VR Cam from the Maxon Cineversity site,” he said, “we had actually developed our own completely home-brewed reflection-based VR camera system in Cinema 4D but were limited to monoscopic spherical outputs that didn’t support particles and we also experienced visual errors and glitches above and below the horizon.

“Using CV-VR Cam completely solved all the stereoscopic problems we were struggling with allowing for flawless equirectangular outputs,” added Shaftel. “The most powerful aspect of using the plug-in was that we could use the same animation and design workflow we were already comfortable with using in Cinema 4D for non-VR projects and focus on the storytelling challenges (and opportunities!) inherent in this completely new medium.”

Following the Cannes Film Festival, Extravaganza will screen as an Official Selection of the Sydney Film Festival in Australia, June 7-18.