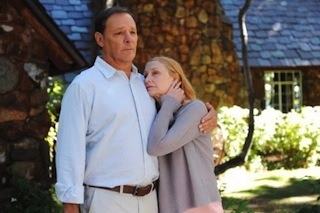 Zeichner took a naturalistic approach in finalizing the film’s look. The principal location was a stone-and-beam house built in 1929 on Lake Tahoe’s toney Hurricane Bay with superb views of the lake. The home also served as a location for the 1951 movie A Place in the Sun.

“The house itself is a character; it shapes the human characters,” notes Zeichner. “The film’s color tones are subtle and we use them to suggest the relationship between the characters and the landscapes. The environment is breathtaking and there are many wonderful, intimate moments between the characters. It’s all part of the cinematography.”

Zeichner applied customized color treatments to certain nighttime interiors to accentuate narrative points. “We made judicious use of windows on characters’ faces, bodies and hands to indicate their motivations,” he explains. “It’s subtle, but important in emphasizing plot details.”

Dolby and Williams are planning to begin screening Last Weekend in film festivals in 2014.