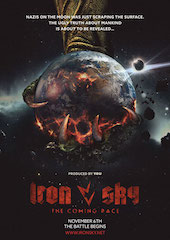 Universal Pictures Home Entertainment Content Group will distribute Iron Sky The Coming Race, the highly anticipated sequel to the 2012 cult hit Iron Sky, across a range of international territories in 2017, including Germany, United Kingdom and France as well as a big part of the rest of Europe (excluding Scandinavia).

The deal also includes the Middle East and Latin America, as well as select territories in Asia. In addition the film is sold to Japan (Twin) and Korea, Thailand and Vietnam (Noori Pictures). The original Iron Sky grossed more than $10 million at the worldwide box office, and has been seen by more than 25 million people so far. Iron Sky Universe was launched in 2013, to expand the Iron Sky franchise. UPHE Content Group will distribute the film across multiple formats, including cinema, home entertainment and TV.

A dark sci-fi comedy inspired by conspiracy theories, Iron Sky The Coming Race is Iron Sky Universe's first production and to date the film's first teaser has garnered more than 33 million views on YouTube, underscoring the strong level of anticipation for the film's release.

Iron Sky Universe producer Tero Kaukomaa said, "Our strategy is to guarantee the widest possible availability for Iron Sky The Coming Race and give our audience a good chance to pay for it. I look forward to global roll out of the film in 2017."