What’s Wrong with the DCP? 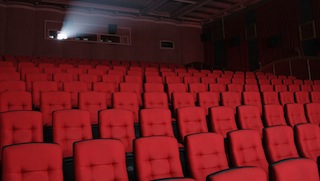 DCP stands for Digital Cinema Package.  It’s the name for the collection of digital files that make up a digital movie distribution. Actually, there’s a proper name for the collection of files that make up a movie – called the Composition – but no one seems to like that name, and everyone likes the name DCP. There are two kinds of DCPs in the world, because engineers can never leave things alone. The Good DCP and the Bad DCP. When I say Bad DCP, I mean the one called Interop DCP. When I say Good DCP, I’m talking about the one called SMPTE DCP.

What’s so bad about Bad DCP? Well, that’s what this article is about. While there are some things the Bad DCP can’t do, it’s actually pretty good, because it’s the only DCP that can play on 130,000 systems around the world. The Good DCP, on the other hand, can’t play on all 130,000 screens, for various reasons. What’s so good about that? Well, that’s an interesting question.  That’s also what this article is about.

Once upon a time, long, long ago, in December 2001 to be exact, a group of enterprising people got together (after I called them) and defined this thing we now call DCP. After nearly two years of SMPTE meetings where we talked about everything BUT how we would actually digitally package a movie, we nailed the concept with three companies in agreement in one afternoon. Then we set about socializing it. That was pretty hard, because Facebook didn’t come along until a few years later. But we improvised and held weekly meetings, some of them were actually face-to-face, to get people onboard with the concept. 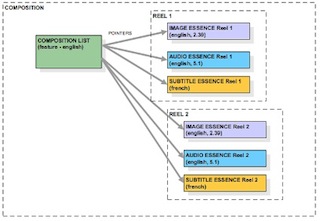 Engineers, having secretly sworn to the unwritten NIH oath (Not Invented Here), are an interesting bunch to present ideas to when the ideas are not theirs. Knowing what lay ahead, yours truly formed and chaired the first packaging committee in SMPTE to actually work on a package. I authored, and we edited as a group, a document describing the concepts that came out of the original December 2001 meeting with the three manufacturers, resulting in several drafts. Two graphics from those drafts are shown on this page:  the Composition from a draft dated December 20, 2001, and the Show List from a draft dated October 29, 2002.  If you’re familiar with the DCI spec, you might recognize them. (There’s more, but no need to bore you.)

Now, Wikipedia says that DCI “defined the term” Digital Cinema Package. The historians among you will recall that DCI didn’t exist in December 2001. But Wikipedia is correct. In those early days, we just called it “Package,” in the same way we spoke of “Composition.” At the NAB Digital Cinema Summit in 2002, I gave a presentation called Content Packaging for Digital Cinema covering this work we were doing. That was close, sort of, but not as slick as DCP. Gotta give that to DCI.

The manufacturers of digital cinema servers knew they needed to play the same distribution files.  It’s called interoperability. It was obvious that they needed to be interoperable after this movie came out by a guy named Lucas about these Jedi people. But there were no standards yet to tell them how to be interoperable, because we were still socializing the concept, and engaged in busy work, I mean, debating important stuff, you know, details. Committee work can be tedious, and we came up with this idea for a Request for Comment that was sent to companies like Apple. But they were busy with this thing called iPod.  So our eager manufacturers came up with this idea called MPEG Interop Initiative. It was all hush hush at first, because they were actually talking with each other and coming up with ideas and no lawyers were present. The MPEG Interop Initiative was important, because they actually got stuff done. They created the MPEG Interop format, even though it ignored the packaging work we were doing. When DCI finally got going, it was decided that JPEG 2000 would be a better choice for image compression, so the MPEG Interop group cleverly changed its name to the JPEG Interop, and, you guessed it, out came the JPEG Interop format. But by this time they were paying attention. 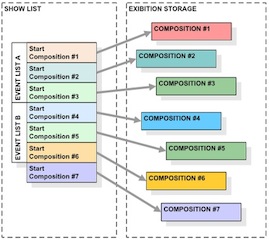 In 2005, DCI formally released its specification, and by the end of that year studios were signing virtual print fee (VPF) deals that provided a subsidy towards the purchase of digital projection equipment that would replace film projectors. But there still were no standards for distributing digital movies. By that time, the JPEG Interop format that equipment makers were using was based on a set of draft documents in SMPTE that defined the Composition, Composition Playlist, and the accompanying track files. Thanks to Interop, movie distributions were interoperable among digital cinema equipment of different makes. Manufacturers could sell equipment, and exhibitors could spend all that VPF money that the studios were handing out. Life was good.

But we made a mistake. We didn’t standardize the Interop format, even though it was based on draft documents developed in SMPTE. We were still, you know, debating the details in the standards committee. In fact, it wasn’t until 2009, four years after the rollout began, that SMPTE completed the standards for what we now call SMPTE DCP, the Good DCP. But outside the standards committee, that digital cinema stuff was selling, and it was selling because of Interop DCP, the Bad DCP. In fact, those sales guys did such a good job of selling equipment with Bad DCP that by the time Good DCP became a standard, no one was interested.  Cinemas were already playing movies using Bad DCP, and after all, whether it’s Good DCP or Bad DCP, it’s still just a DCP. The movie played.  People bought tickets and popcorn. Distributors got their cut. And VPF money flowed back to exhibitors. Why muck with the DCP?

Back in the standards committee, we convinced ourselves that we did the right thing by not standardizing Bad DCP because it was only temporary. It would quickly be replaced with Good DCP. But things weren’t going as expected. So people began saying things. Exhibitors needed to upgrade. Distributors needed to stop delivering Bad DCP. But no one wanted to admit the truth.  The DCP characteristics that DCI had first specified in 2005 were really those of Bad DCP, because Good DCP didn’t exist in 2005. And manufacturers needed to follow DCI over SMPTE, because DCI represented the studios, and studios were the ones paying VPFs. Besides, those VPF agreements required adherence to the DCI specification, and the DCI specification didn’t even mention the top-level SMPTE standard for Good DCP until an “errata” was issued in 2013.  To make things worse, Bad DCP’s subtitles weren’t interoperable with those of Good DCP, and to this day, a lot of equipment in the field still can’t play Good DCP subtitles. For some equipment, this will never be fixed until the equipment is replaced. Not so good for Good DCP.

So here we are, 130,000 screens later, and all of them playing Bad DCP. It’s now six years after the standardization of Good DCP, and only Dolby uses it, for its Atmos sound format. So Good DCP has found a user (yay), but on less than one percent of screens (ooh).

Truth be told, Bad DCP has been given a bad rap. After all, Bad DCP is what makes digital cinema work. Not only that, but Bad DCP is really SMPTE DCP 1.0. Good DCP is really SMPTE DCP 2.0. Good DCP is an improvement, not an innovation. And while it can be nice to have something to upgrade to, not everyone can or will do it. There’s this company in Redmond that has a similar problem called Windows XP. They’d like everyone to upgrade, but it’s just not that simple.

One digital cinema manufacturer actually figured this out. The DVS Clipster, which probably masters more blockbuster movies than any other product, labels Bad DCP as SMPTE Phase 1, and Good DCP as SMPTE Phase 2. Pretty clever, yes?  Put a pin on that thought.

Bad DCP not only gets a bad rap, but it’s been subject to abusive treatment. The Interop DCP specification – Bad DCP – is locked up on a private FTP server somewhere in Southern California. By decree of the companies that agreed to lock it up, only a limited number of people have the password to access Bad DCP’s documentation. The hope was that locking up Bad DCP and keeping it out of sight would cause people to switch to Good DCP. But that hasn’t worked.  Given that Bad DCP is what allows movies play on 130,000 screens all over the world, locking it up isn’t the smartest way to manage documentation, interoperability among competitors, and archiving. The companies behind the lockup are not only an embarrassment to the industry, but they are an embarrassment to themselves, as they probably have forgotten that they’re responsible.

Doremi, for example, is now owned by Dolby. Dolby is now a public company. GDC is now majority owned by Carlyle Group. Do the managers in these companies know that the specifications that their customer’s businesses rely on are not under their control and are not standards? Probably not.

It’s time to stop the nonsensical behavior surrounding Bad DCP and fix the mistake. It's time to recognize that Bad DCP is what allows movies to play on 130,000 screens around the world. It’s time to follow the example set by Clipster: label Good DCP as SMPTE DCP 2.0, and Bad DCP – Interop DCP – as SMPTE DCP 1.0.  It’s time for SMPTE to take action by formalizing Interop DCP, a format that emerged from a SMPTE committee, and claim success for the interoperability of digital cinema worldwide. It’s time to make all DCPs Good DCPs.

The benefits would be in more than name. Formalization of Interop DCP would open the door to smarter ways to manage incremental upgrades in packaging technology.  There are better ways to manage change than to burden distribution and exhibition with the wholesale changes and duplicative and wasted efforts that are now required whenever an improvement in packaging is introduced. I’ll explore a better method for introducing improvements in packaging technology in a future article, which, as you might guess, requires that all DCPs be Good DCPs.

Michael Karagosian is the president of MKPE Consulting LLC, specializing in business development and intellectual property for entertainment technologies.  His company website is at mkpe.com.