Who Was Alice Guy-Blaché? 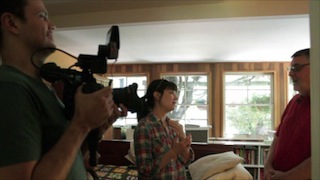 Great stories, in reality, aren’t the only ingredient needed to make a successful documentary. Filmmakers also need patience, perseverance, creativity, luck and, of course, funding. To say that co-directors Pamela Green and Jarik van Sluijs have a great story to tell is an understatement. Largely unknown and unappreciated, Alice Guy-Blaché was, without question, one of the most important figures in motion picture history. Now, Green and van Sluijs are using digital cinema technology to gather, assemble and organize a wide range of information to get Guy-Blaché’s story ready for the big screen. And what a story it is.

A pioneer of both French and American cinema, Guy-Blaché was among those in the audience in Paris in 1896 who saw one of the first private screenings that the Lumière Brothers gave of their revolutionary Cinématographe, the first reliable system to project moving images. With that magical footage of workers leaving a factory, the motion picture industry was born. With her at the screening was her boss at the time – the engineer and industrialist Léon Gaumont. The following year Guy-Blaché made her first film, one of the first narrative films ever made and by some accounts completed it before Georges Méliès made his first movie.

Following that first effort she was significantly responsible for the birth and growth of the Gaumont film studio in Paris, which she ran for almost a decade (1897-1907). Guy-Blaché went on to make one of the first films ever to use a close-up shot, created synchronized sound films as early as 1902, and in 1910, founded, built, and ran her own studio, Solax, first in Flushing, New York, then in Fort Lee, New Jersey (not far from where Edison and D.W. Griffith worked). All along she was a wife and a mother and yet she still wrote, directed, or produced more than a 1,000 films over a 20-year-long career. Then her film career all ended. Her name disappeared from film history, and her legacy vanished into the shadows.

Green first learned about Guy-Blaché while watching a documentary on AMC about women in the early film business and it had a short clip about her. Green’s first reaction was the same as almost anyone who first learns about one of the least known industry pioneers, which is “How can it be that I’ve never heard of this woman before? Who was Alice Guy-Blaché?” 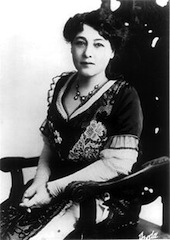 Green and van Sluijs immediately saw the potential for a film and started networking and gathering information. They understood the difficulties of making a documentary and, as Green says, understood the reality that “to tell a woman’s story is even harder.”

They had some advantages that not every documentary filmmaker can claim. In Green’s words, “We understand storytelling with limited footage.” They’ve had lots of experience doing just that. She and van Sluijs are the founding partners of the PIC Agency, an audio-visual communications studio focused on entertainment and motion design based in Los Angeles, California. They have designed and produced a variety of content for motion pictures, television, and commercials, and are known for their innovative and memorable main title sequences for feature films like The Bourne Supremacy, Fantastic Four, The Illusionist, Cloverfield, The Kingdom, Sex and the City, Twilight, Push, Surrogates, The Cabin in the Woods, The Muppets, Red Dawn, G.I. Joe: Retaliation, Now You See Me, Fast & Furious 6, 42, and many others. They often combine archival images, audio, CGI animation, and editing into gripping and entertaining stories. They attribute their success to a never wavering focus on story.

After two years of research, which has taken them all around the country and the world, both physically and virtually, they have new findings about Guy-Blaché, greater than they could ever have imagined: print and audio interviews with Alice herself, old family 8mm films, recordings, photos, scrapbooks of clippings collected by Alice’s stars, letters in her own hand. They have discovered and translated French documents, and found rare correspondence written by Guy-Blaché in English that bring new insight into the story. There are also a few books for reference, prominent among them Alice Guy-Blaché: Lost Visionary of the Cinema by Alison McMahon.

In addition to all their research Van Sluijs and Green have also used the connections they’ve made in the film community after many years of working there to build support for their documentary, among them Jodie Foster who has agreed to narrate the film. “She signed up the minute we described the project to her,” says Green. 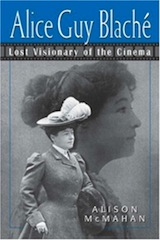 Green says, “Because Alice Guy-Blaché wore many hats throughout her career, we decided to ask our film industry colleagues, who today write, direct, produce, design, light, shoot, edit, and distribute, to help us understand the making of Alice's films. Through their experience and knowledge of their craft, we are able to tell Alice’s story and also highlight the relation of present to past.”

Networking also enabled them to get the Alison McMahon book into the hands of Robert Redford, who read it and loved it. and soon after agreed to serve as executive producer. Whether his company Sundance Productions will invest any money in the movie seems to be undecided for now.

Because they worked on three of his films, Redford knew of their unique storytelling approach and agreed to serve as executive producer giving not only his name but also his time. His company Sundance Productions is helping them in trying to secure distribution deals, but nothing has been decided yet.

To record all of this they have relied on a Canon Cinema EOS C300 camera, and as Green says, have been “shooting as we go along.” She says the camera was a logical choice for many reasons including the fact that “I own a Canon camera already.” Van Sluijs says he loves the C300 for a number of reasons including its small size, flexible monitor, built-in audio and, especially, its wide dynamic range and the fact that the camera has built-in neutral density filters: 2 stops, 4 stops, and 6 stops.

“The XLR inputs on the C300 are invaluable,” van Sluijs adds. “We are able to connect a LAV mic when we do our sit down interviews, and hook up a directional mic when we're visiting film archives, people’s homes, and exteriors. Being able to monitor them through headphones, and visually is also great. And the camera has full controls of the audio levels for each of the two individual XLR inputs.” 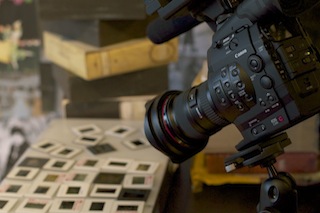 “As far as workflow,” he continues, “we're not in post yet, but it will be one of our biggest challenges. But we will use this challenge as a strength, similar to the way we've incorporated many different formats in lots of the main titles sequences we've done. We've got a lot of experience making all types of footage useable, and have developed a series of tricks to deal with fields interpolation, frame rate, video noise, and film grain issues in the past.”

Their Kickstarter page includes more background material about Guy-Blaché and her incredible story, as well as period photos and a trailer. The trailer, although not the film itself, visually suggests their stylistic approach. Taking the experience they have gained in many years of title work, the film will use 2D and 3D CGI recreations of the locations, technologies, objects, and setting. That is not to say that it will be a VFX film.

“CGI is simply one of the many tools we are comfortable with, and we will be mixing it with a multitude of other media,” says van Sluijs. This includes stock stills and footage combined with recently discovered assets, such as nitrate film (to be transferred and restored), 8mm film, video, slides, and other photographic materials. Green and van Sluijs feel that this all supports the theme of mysteries to be investigated and an understanding of the many controversies surrounding this remarkably creative woman.

The film’s title – Be Natural – comes from a phrase Guy-Blaché used often. When she directed actors – many of whom had never seen a film camera before – she advised them to be natural. As she recalled in an interview, she had signs with the phrase in her Solax studio.

Green believes their research is coming to an end, at least domestically. “We’ve probably exhausted as much as we can in the U.S.,” she says. She and van Sluijs would still like to travel overseas to pursue some new leads in other countries but that and the challenge of editing the content they currently have has been thwarted by a lack of funds. They hope to have the film ready to release by the end of the year.

As they continue with this labor of love Green and van Sluijs will follow the advice they were given very early in the process, advice that applies to all aspects of filmmaking from money, information, services, equipment and interviews. It’s a lesson that sooner or later every successful documentary filmmaker learns, which Green says is simple: “If you don’t ask, you don’t get.”