FotoKem was the facility of choice for providing comprehensive creative and technical services from pre-production through final deliverables on the critically acclaimed Star Wars: The Last Jedi from Disney/Lucasfilm. The facility built technically advanced solutions that supported the creative team through their interplanetary production from dailies to color grade.

Are we alone in the universe is a question that human beings have pondered likely since the dawn of time. The new documentary film ET Contact: They Are Here documents the jaw-dropping stories of individuals from around the world who share similar accounts of extraterrestrial otherworldly encounters. Written, directed and produced by Caroline Cory, the film takes viewers on an extraordinary journey to uncover whether these seemingly independent yet parallel reports may actually be scientific evidence of a greater phenomenon at work.

FireFly Cinema’s FireDay digital dailies management application is available for just $249 a year instead of the usual $999, now through October 21.

EditFest, the day long celebration of the art and craft of editing, returns to the Frank Wells Theater at Walt Disney Studios August 12. Presented by American Cinema Editors, EditFest 2017 presents top-level film and television editors sharing their experiences and insights. Featuring panels, clips, and conversation, EditFest offers a unique opportunity for attendees to engage with panelists and colleagues throughout the day and during a lively post-event reception.

Hare Krishna! The Mantra, The Movement and the Swami Who Started It All is a documentary film on the life of Srila Prabhupada—the 70-year-old Indian Swami who arrived in America without support or money in the turbulent 1960s and ignited a worldwide spiritual phenomenon with only his unflinching determination and faith. The film posted at AlphaDogs in Burbank. As with most historical documentaries, the biggest hurdle the team had to overcome were the technical challenges inherent in working with multiple source formats.

For Nissan’s Return of the Snowman spot, visual effects specialists The Embassy in Vancouver banded together with post house Alter Ego in Toronto. The Embassy is well known for its photo-realistic, hard surface VFX work, from creating the digital Iron Man suits for all three films to building massive drop ship hangers for The Hunger Games trilogy. Having worked on countless commercials with Alter Ego, The Embassy made the decision to become part of the creative process for grading, to improve the efficiency and precision of their VFX work and present a consistent preview to their clients.

AlphaDogs has completed work on the documentary film John Lewis: Get In The Way, which tells the story of the courageous civil rights hero, congressional leader and human rights champion, whose unwavering fight for justice spans the past 50 years. In order for the documentary to air on PBS, Bill Woolery, offline editor, had the task of cutting the film down to 54 minutes, taking six minutes out of the original cut and handing off the cut down to AlphaDogs for finishing. 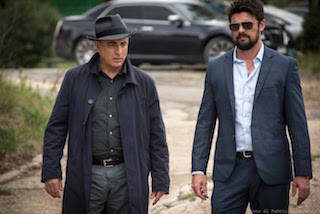 Bent is the latest motion picture production to move its media management to the WCPMedia cloud.