Abramorama is partnering with Shakey Pictures and Reprise/Warner Records to release the latest Neil Young film Mountaintop across North America on October 22 and in Europe and South American on November 18.  Two-time Rock and Roll Hall of Fame member Neil Young continues his 50-year odyssey with Crazy Horse, this time in the mountains of Colorado with Mountaintop, a Bernard Shakey + dhlovelife film with cinematographer Adam C.K. Vollick. 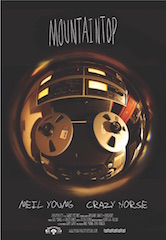 Abramorama will release the Shakey Pictures film across North America and around the world, including France, Australia, Germany, the UK and Latin America.  This marks the 13th time that Abramorama has collaborated with Bernard Shakey, dating back to Greendale and including Jonathan Demme’s trilogy, The Bernard Shakey Film Retrospective and the rerelease of Human Highway.

Mountaintop is a raw and extremely unfiltered look at the process of Neil Young with Crazy Horse making their first album in seven years. Witness the laughter, tensions, crusty attitudes & love, of a rock & roll band that’s been together for fifty years as they share their passion, first and foremost for the music.