Award-winning actor John O'Hurley, best known for playing J. Peterman on Seinfeld, will be the evening's host as the Society of Motion Picture and Television Engineers celebrates its 100 years of leadership in motion-imaging innovation and creativity. The event will be held October 28 in Hollywood, California, at the Ray Dolby Ballroom.

O'Hurley is a versatile actor, presenter, and Broadway star. He is also a New York Times best-selling author and Billboard chart-topping composer. O'Hurley earned a Screen Actors Guild Award for his work on Seinfeld, was named one of People Magazine's Sexiest Men Alive, and won the first season of Dancing with the Stars. He is the regular host of NBC Sports' highest-rated yearly show, The National Dog Show, Presented by Purina, and has also hosted Family Feud and To Tell the Truth. He is the voice of King Neptune on SpongeBob Square Pants and the mayor on Phineas and Ferb. He is also known for his theater performances as King Arthur on Monty Python's Spamalot and his continuing portrayal of slick lawyer Billy Flynn in Chicago on Broadway and stages across the country. 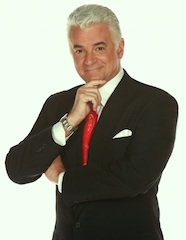 "The more I learn about SMPTE, the more I understand how powerful its influence has been in the entertainment industry," said O'Hurley. "The standards and recommendations developed by the Society play a vital role in both the magnificent and the seemingly routine aspects of the entertainment industry that are often taken for granted. I look forward to the SMPTE Centennial Gala and celebrating all that the Society has accomplished in helping to make those of us on screen look good and in providing technology that contributes to the industry's ability to produce engaging content for audiences across the globe."

O'Hurley has been recognized for his philanthropic work as well as his talent. He was awarded the Ellis Island Medal of Honor in 2012 for his accomplishments in the arts and philanthropy. His participation in the SMPTE Centennial Gala is yet another role he will play in supporting charitable organizations and the arts.

"John O'Hurley is a multifaceted entertainer with so much talent, and we are very excited to see what he has in store for our Centennial Gala," said Barbara Lange, executive director at SMPTE. "The evening will acknowledge the remarkable impact of the Society's work in shaping the entertainment industry of today, as well as how our efforts are paving the way for future advances in the creation, distribution, and consumption of the moving image. Finishing off with a dance party, the Gala will send SMPTE into its next century with style."

Taking place following the SMPTE 2016 Annual Technical Conference & Exhibition (SMPTE 2016), which will be held October 25-27 at the Hollywood and Highland Center, the SMPTE Centennial Gala will honor the achievements of the Society over the past century, from its beginnings bringing order to the nascent motion picture industry to its evolution over the years to address the demands of television and the internet.

Guests at the SMPTE Centennial Gala will be treated to a cocktail hour, dinner, and live music and entertainment throughout the evening. During this landmark celebration, SMPTE will officially bestow Honorary Membership, the Society's highest honor, upon Avatar and Titanic director James Cameron in recognition of his work advancing visual effects, motion capture, and stereoscopic 3D photography, as well as his experimentation in higher frame rates. SMPTE also will present Douglas Trumbull, who was responsible for the visual effects in 2001: A Space Odyssey and Blade Runner, with the Society's most prestigious award, the Progress Medal. The award recognizes Trumbull's contributions to VFX, stereoscopic 3D, and HFR cinema, including his current work to enable stereoscopic 3D with his 120-frames-per-second Magi system.

Tickets for the SMPTE Centennial Gala are available for purchase online at www.smptegala.org.